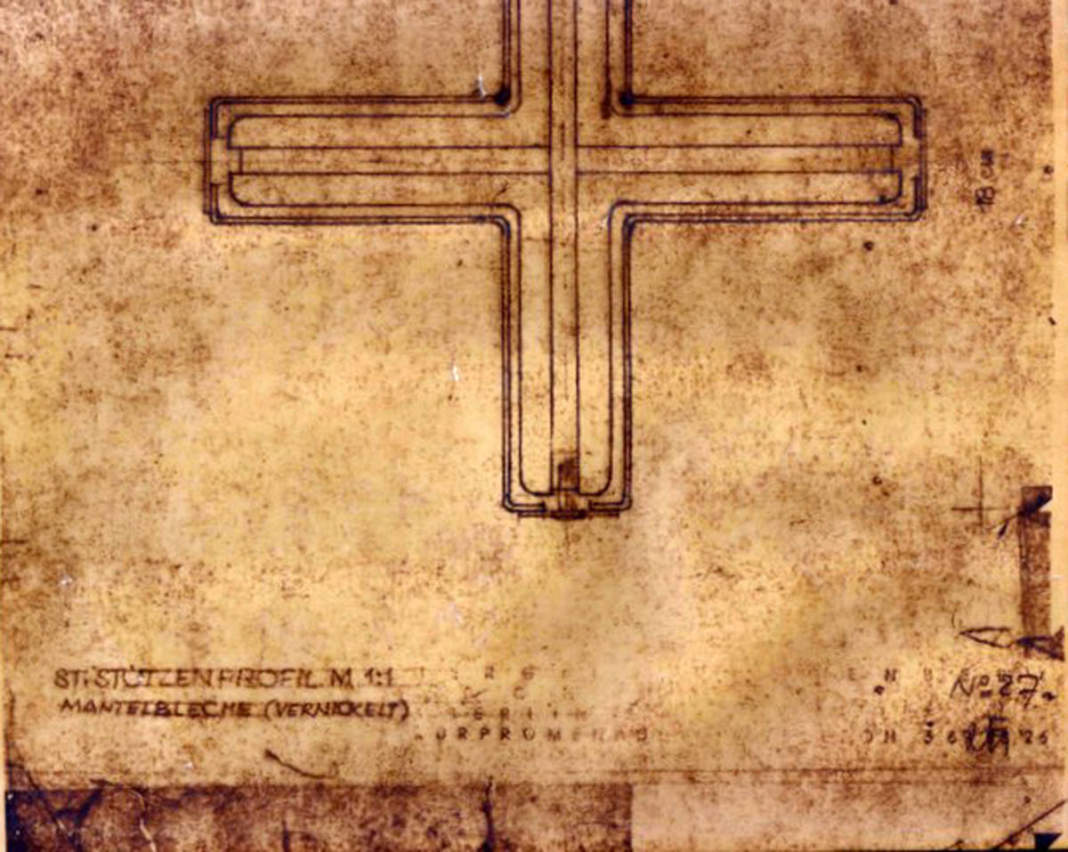 The cruciform pillar made in Barcelona in 1929

''Once upon a time...", you might begin this way to tell the incredible story that begins with the loss of Mies van der Rohe's Barcelona Pavilion original drawings, caused by the bombings that razed Berlin in 1945.
Thanks to the incredible work by Sergius Ruegenberg, Mies Van Der Rohe's assistant, that patiently redrew by heart all the architectural drawings at the end of World War II, we can appreciate “Barcelona Pavilion in Bologna. A history of drawings from Mies van der Rohe to Ruegenberg”.
The exhibition is devoted to the unpublished drawings of the Barcelona Pavilion built by the Master of the Modern Movement, to represent Germany at the Universal Exhibition of 1929.
Promoted by ABC, the exhibition will open from the 24th of September till the 24th of October 2015. The event will coexist with two important design events, the Bologna Design Week and CERSAIE, enriching the quality of the history of architecture and design storytelling during the month of October in Bologna. A fascinating history of  unrevealed drawings, made by people, architecture, passion and "international affairs”.
Ruegenberg is the undisputable main figure of this story, not only because  we can admire his reproduction of the pavilion architectural facades, but also because he was the only person authorised by Mies van der Rohe, to be the Director of the works, in case a reconstruction of the Pavilion will happen.
After the opening of the reconstruction of “L'Esprit Nouveau Pavilion” by Le Corbusier  in its fair center, Bologna decided to reconstruct the Barcelona Pavilion, in order to become a cultural and international experiences meeting place.
Thanks to Oikos leader George Trebbi, the engineer Mario Ciammitti, who was entrusted to search material and documents to the original pavilion, started to research and travel to Germany. At the same time, an intensive exchange of letters, started between Ruegenberg and Hans Maria Wingler, at the time the Bauhaus Archive's Director in Berlin. The great mutual respect between the two, lead Ruegenberg to donate in 1983, their own drawing to the engineer Ciammitti.
The Barcelona Pavilion is the undoubtedly ultimate expression of "less is more" statement by Mies Van Der Rohe, master of the Modern Movement and its architectural revolution based on functionality, simplicity, building structure's reduction to miminum.
The Mies van der Rohe formal rigor does not mean the loss of vitality and brightness, thanks to the use of four different colored marbles for the walls or the color of the glasses, as well as the large retail black carpet, with red curtains and the yellow gold onyx wall, are a tribute to the Pavilion's geographical origins.
However, between 1983 and 1986, the King of Spain ordered to rebuilt the Pavilion in Barcelona, previously destroyed in 1930. For this reason Bologna lost its opportunity but fortunately, referring to the photographic material, the philological work of Mario Ciammitti and his archives, is nowadays possible to appreaciate a piece of history that began in 1929, through the twentieth century, the World War II, and arrives in Bologna in the early eighties.
The exhibition consists of 24 drawings on different size of original tracing papers by Sergius Ruegenberg; 6 photos from 1929, the correspondence between Mario Ciammitti and Hans Maria Wingler, Founder and Director of the Bauhaus Archive / Museum of Design until 1984 and the correspondence between Mario Ciammitti and Sergius Ruegenberg, regarding the technical aspects of implementation.
Thanks to the contribution of Gianpaolo Gazziero and KNOLL who lead the exhibition project, it is also possible to admire the original furnishings of the Pavilion, the famous Barcelona chair and Barcelona stool, historical icons of the world of interior design, for which Mies design was inspired by ancient Rome; conceived as resting place for the King and Queen of Spain: "the modern version of a royal throne "recalls Edward L. Glaeser.
A unique opportunity that ABC offers to Bologna: an exhibition that explains the spontaneously ferment and excitement about the international architecture world of those years and the ambitions of Bologna, already metropolitan city.