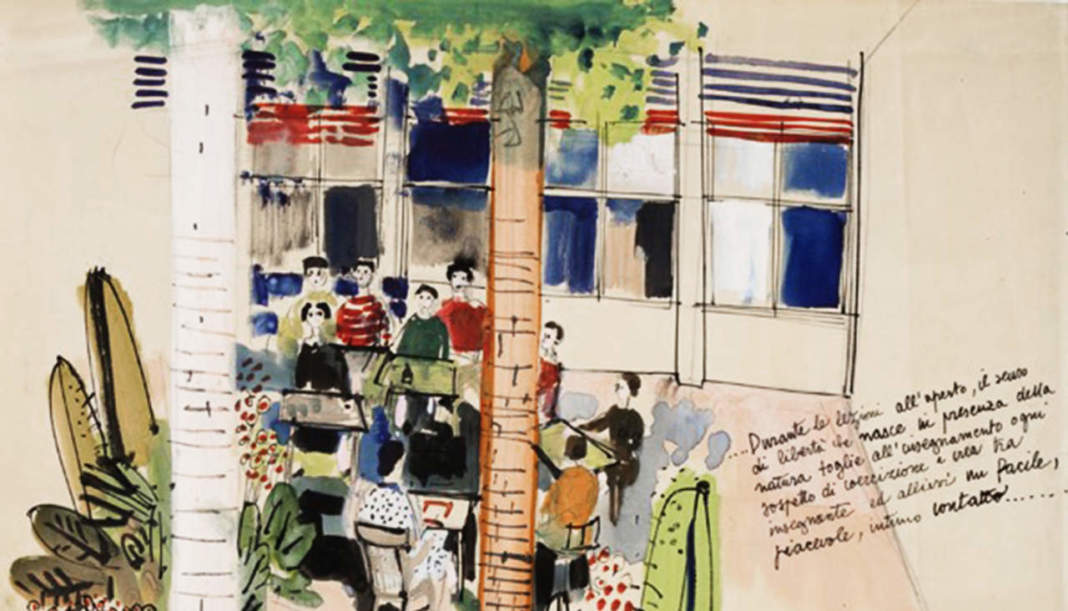 Ten years have passed since the retrospective of the London Design Museum for its 90 years and since its disappearance that same year. Since then, Sottsass's work has not been the subject of a major exhibition. It is now up to the Triennale of Milan, on occasion of the centenary, with the mediation of Barbara Radice, companion of the architect-designer, to evaluate one of the masters of Italian design. A particular, “non academic” exhibition, which Silvana Annichiarico in the catalogue defines “intimate, more than monumental”, where the idea of storytelling prevails over cataloguing: in fact, the man prevails over the designer through his very own words that run along the walls and black monitors scattered throughout the rooms. Words accompanying the exhibition path, marking, with reference to the book titles from the Sottsass archives and to his writings, the nine thematic sections set up by two of his fellow-travellers: Michele De Lucchi, with whom he founded Memphis, and Christoph Radl, art director already partner of Sottsass Associati. So an exploration of Sottsass’s universe, carried out by following a lenient history which from post war years to the new century, compresses multiple interests, omitting many materials that mostly coincide with industrial design (almost completely absent his experiences with Olivetti, Alessi and so on). From the initial passion for painting (with Luigi Spazzapan, in Turin) and sculpture (evident Calder's influence seen in Paris before the war), to ceramics. So much so that the exhibition opens with the Offerta a Schiva (1965), conferring from the outset a “cosmic” intonation, almost a key to interpreting the entire human parable of ours. What follows is the experimentation with materials for the first handcrafted objects, alternative publishing, the large totem ceramics exhibited with the life-size drawings preserved at the CSAC in Parma - which, in possession of a significant fund donated by Sottsass in 1979 is among the main lenders of the exhibition - along with the containers Superbox and Valentine, exhibited as an icon along with an English video of that period. This first part, between 1947 and 1972, terminated by the participation in MoMA’s choral exhibition, of which a valuable video contribution is displayed, concerns the trait d'union between artistic experimentation and design. An eye-opener is the first of the rooms called  “Per qualcuno può essere lo spazio”, now the title of an autobiographical collection of Adelphi, with the little-known objects of the fifties and sixties since making a sole appearance in Domus during those years; Arredoluce lamps, pop furniture for Poltronova (from the Mourmans collection as most of the furniture on display). Here again there are two panels on which architectural subjects are painted with tempera (Hotel in Iglesias and Villa in Sardinia of 1949), which in their discreet presence perhaps reveal better than other exhibits Sottsass’s use of instruments and languages. “Colder”, but no less rich in pieces is the second section, linked to the first by the photo shoot “Antibes Girls” in 1963, exhibited for the first time and which would suffice to convey Sottsass's passion for “reportage”. (In fact, all the exhibits include photographs, from the first 2004 Photo Retrospective at the Museum of Capodimonte, which were supposed to give shape to the project of the unfinished book “There is a Planet”, lent to the entire exhibition and edited only now by Electa). The concluding part summarises the path of development, that from the end of the Seventies marks the postmodern era of Memphis, which also leads to the architecture of the Nineties – confined to the last room but anticipated by a series of drawings from 1988 to 1997 – and to Sottsass’s notoriety in terms of “signs” as a composer of forms (but which to him would seem to be “Rovine”, title of a room with furniture-sculpture), drawn from a repertoire of volumes, colours and textures indistinctly used in houses, interiors and furnishings and which has ended up identifying tout court the work to its author. And in the aftermath of exhibitions and festivals (after the Vitra Design Museum, the Met, the Cini Foundation) the CSAC, the Centro Studi e Archivio della Comunicazione of Parma University virtually receives the testimony, in order to continue to divulge the core of the designs. From November 18th to April with “Ettore Sottsass. Oltre il Design” and the important publication of the related catalogue.