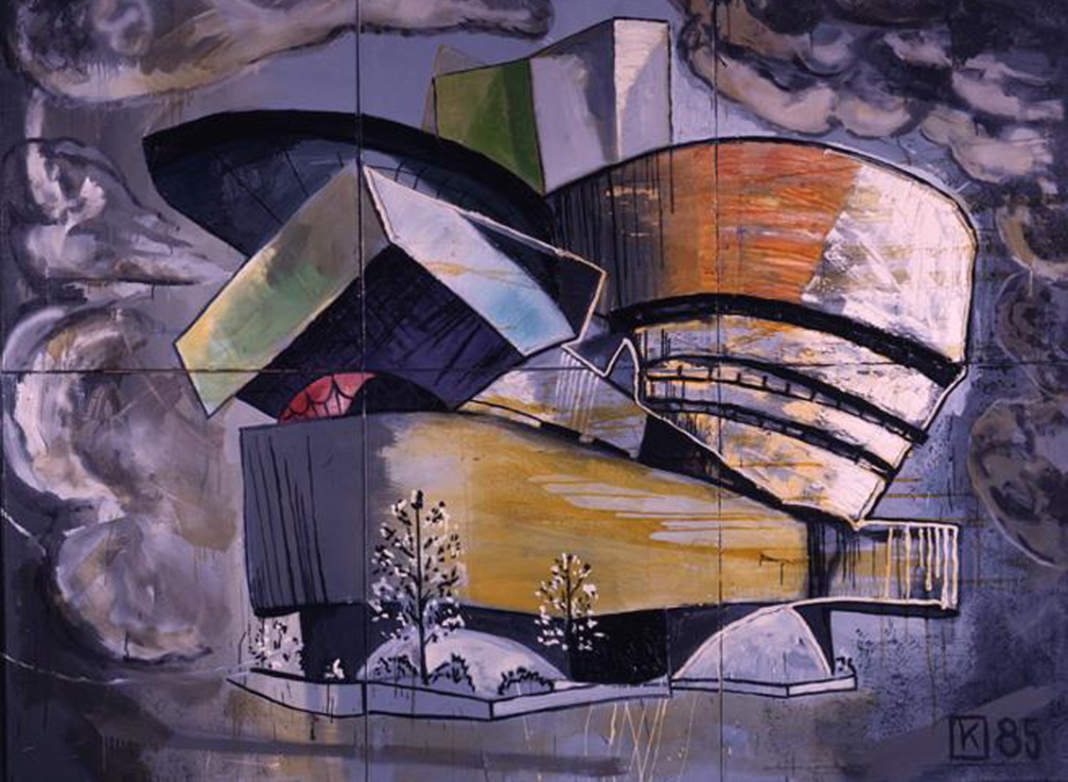 This year’s Summer appointment with culture, organised in the civilised city of Frankfurt, attaches great significance to the spirit of innovation promoted ever since 1984. To remember past avant-garde movements and to speak of modern times, the anti-conformist novel by George Orwell was deliberately commemorated.

A group of lively intellectuals, in that significant year of 1984 in certain (recently emptied) former upper-class residences, located in parks facing the old city centre and aligned along the South bank of river Meno, set about creating one of the most important late 20th-century concentrations of new architecture, prestigious collections and innovative programmes for the benefit of the archives and museums.

With the rapid elapsing of three decades of intense cultural life, in the year 2014, it is now time to recall the figure of the critic, collector and polemicist Heinrich Klotz, who was the founder and the first director of the modern Deutsches Architekturmuseum.

The deliberately contradictory union of works and documents, that make up the exhibition’s thirtieth anniversary, celebrates at once a name, a place and an idea.

Architectural historian, polemicist, avid collector of original drawings, weaver of international relations, Heinrich Klotz (1939-1999) is commemorated for his positive energy and for having been placed as fulcrum of a network of cultural relations on a worldwide scale. Thanks to personal relationships, he endeavoured to seduce, firstly by appreciating, then

transforming the most destabilising production into archival material, and subsequently into distinguished cultural heritage, that subtle need for utopia innate in all major international architects, who were already active in the 1960s: great names like Hans Hollein, Peter Cook, Aldo Rossi, Richard Meier, Tadao Ando, Rem Koolhaas or Frank Gehry. This parade of figures should be enriched by Oswald Mathias Ungers, the learned and esteemed German designer of the museum building itself, even at that time perceived as a box within a box.

On occasion of the 30th anniversary of the opening of the DAM, the most important works acquired by Klotz are exhibited in a kind of joyful Wunderkammer. This spectacular collection includes letters, interviews, audio messages, an oil painting by Martin Kippenberger, a collage by Christo and many valuable drawings, models, furniture, original construction details, and lastly a myriad of photos.

The DAM was the first museum to be opened in the fascinating Museumsufer in Frankfurt. Moreover, it was the first museum of architecture in the world to offer a programme of surprising architecture, not to mention cultural schemes on German issues, always observed with an international outlook. This was already widely known, but the Archives have mustered up new momentum from the celebration in progress, housing a collection that fully reflects the contemporary architectural scene and broadens the boundaries of an increasingly globalised panorama, spreading from Korea to Sri Lanka.

The glass cases display the texts of numerous influential books and articles written by Klotz and above all the testimonies of his legendary architectural exhibitions, including "Revision der Moderne, Postmoderne Architektur 1960-1980", inaugurated in 1984. Klotz’ creative tension is confirmed in his mission of taking the helm of an international movement, which has gone down in history as Postmodernism. Such strong commitment was also subsequently reserved to plan the different yet prestigious ZKM, also known as the Zentrum für Kunst und Medientechnologie in Karlesruhe.

Concrete references to contextualist and postmodern architecture have continued to shape the face of Frankfurt: the Schirn Kunsthalle, the Messeturm, the Museum für Moderne Kunst and other eye-catching buildings, which emerged at that time. With the benefit of hindsight, the learned pluralism upheld by Klotz has won its battle. Irony, pop themes and historical quotes, have for some time, continued to enter the current language of architecture throughout the globe. In the close-by, almost bordering Museum für Angewandte Kunst, from the 17th October, the exhibition "1984. Zeit zwischen den Zeiten" (Time between the Times) is to be held to celebrate the decisive year of its foundation in 1984, intended as an epoch-making watershed for the world of taste, fashion, music and pop culture.