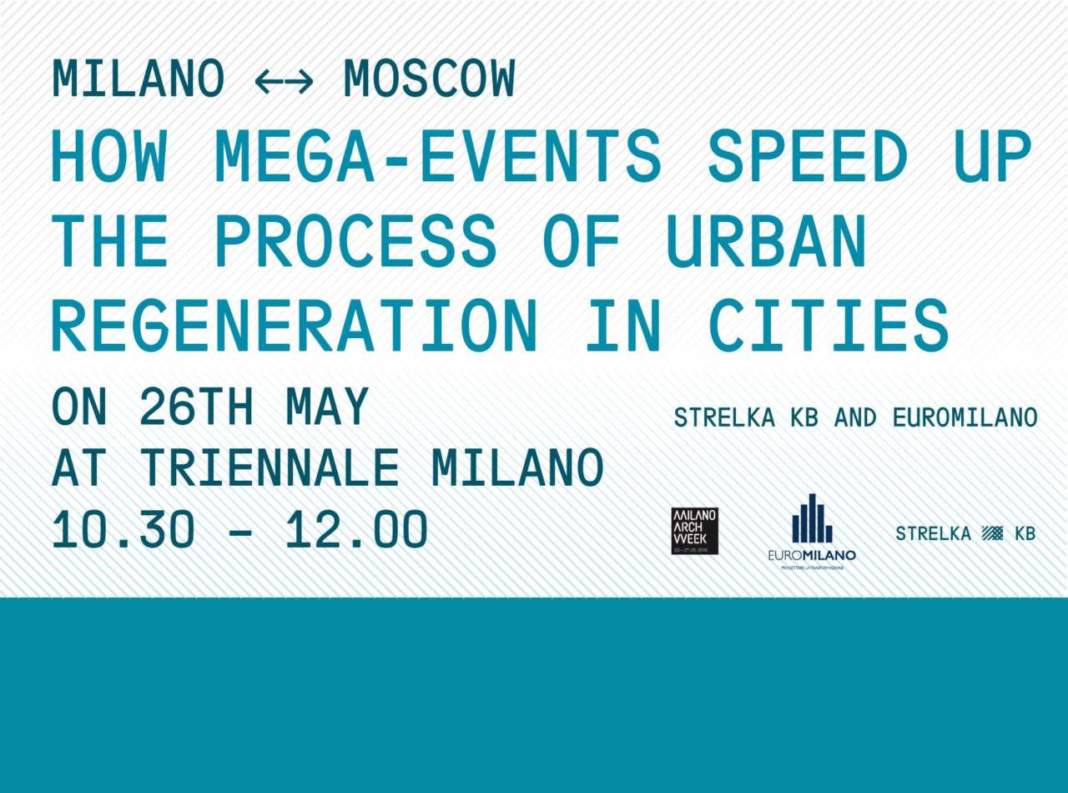 Milano-Mosca. How Mega-Events speed up the process of urban regeneration in cities.

Large international events work as triggers for local development and bring tangible advantages to the host city and country. Amongst their tangible benefits, the effects of mega-events on cities are visible because they are catalysts for economic transformation, help upgrade urban infrastructure, strengthen the international image of the city and accelerate the implementation of desired urban policies and improve the quality of urban environment.
Mega-events such as World Expos, Olympic Games, FIFA Cup, could offer an accelerated route of growth leveraging powerful national and international partnerships of both a public and private nature.
As a consequence of mega-events, the Urban Regeneration of cities is enlarged to all sectors of a city’s life and administration, and it bringing benefits across all sectors: public spaces, housing, infrastructure, culture, environment, economy, services, etc.
Beginning from this statements, the debate Milano-Mosca, planned on May 26th, 2018 at Triennale di Milano, will tackle two different cities that host mega-events in distinct timeframe with the objective to analyze the effects and impacts of the urban context and its urban development, the strategy and vision that lay behind it, and the acceleration of the development of the future planning.
Two very different cities but with an analog urban regeneration that increased the quality of life will be taken in exam: Milan and Moscow.
In particular, the discussion will focus on the past urban redevelopment of public spaces, on infrastructures and housing happened in Milan for World Expo 2015.
The effects of that event will be discussed in public, such as the consolidation of the Milano along the Nord-west axes that runs along the Expo Area of Rho-Pero, the high speed train and motorway. Specifically it will be presented the urban regeneration of “Cascina Merlata” quarter that became a new centrality during the Expo 2015 for housing that hosted invited countries and now is becoming a “new centriphery” of Milano, with new model of social housing developing, commercial areas with green integration.

Regarding Moscow, the ongoing public spaces redevelopment of the most important streets for the final World Football Cup 2018 will be taken in consideration. In fact, due to the final game of FIFA 2018 in Moscow, there has been a definition of “Urban Standards” that establish guidelines of streets and public spaces by providing guidelines for the principal planning, spatial, and architectural organization of greenery, streets, parks, squares. Strelka KB undertook the management of the Moscow government’s “My Street” program — the biggest renovation project in the city’s modern history. Since 2015, Strelka KB has supervised redesign efforts for 250 city streets, avenues, and embankments. The total length of the renovated streets amounts to 50 kilometers.
The event will take place at Triennale of Milano, on 26th of May 2018 from 10.30 to 12.00, during Arch-Week events and it will last one afternoon.
The structure will be made by a series of presentations and a final common debate.
To begin, the curator Giovanna Carnevali, (International project development) will give an introduction of the topic, speaking about the process of regeneration created by Mega-Events on cities.
Then, Prof. Luigi Borrè, President Euromilano, Dott. Attilio di Cunto, CEO Euromilano, and Arch. Giovanna Longhi, will talk about the urban transformation of “Cascina Merlata” masterplan: a new centrality for Milano, urban strategy, projects and development.
Later on, it will follow the lecture “Up Town District“, curated by Arch. Emanuela Recchi, President CEO Recchi Engineering, Ing. Umberto Zanetti, Founder of ZDA - Zanetti Design Architettura.
Then, the event “Moscow streets: vision, strategy, and management of the projects“ will be held by Arch. Denis Leontiev, CEO Strelka KB, that will introduce the Russian contemporary situation.
In conclusion, a panel discussion will be moderated by Dott. Giovanna Carnevali, and Prof. Arch. Alessandro De Magistris, professor of history of the city and of the territory, Politecnico di Milano.