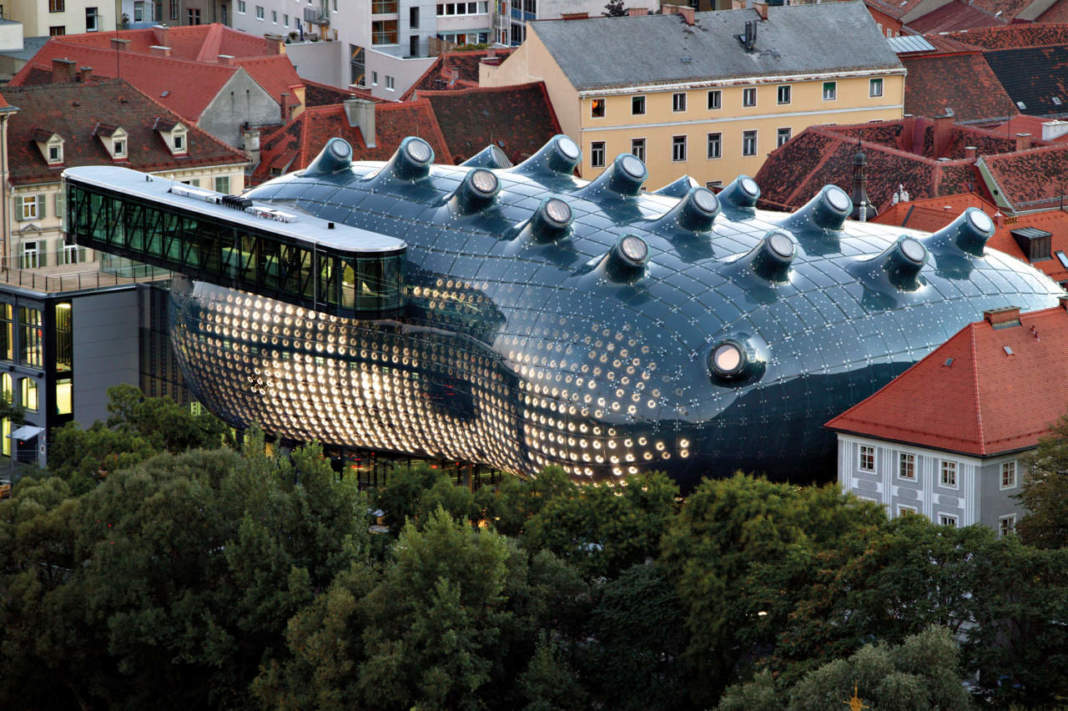 In the late Nineties the city of Graz decided to found a new museum of contemporary art. After two competitions, launched in 1988 and 1998 respectively, which had not resulted in the construction of any of the winning projects, in 2000 the turn has come to a team of London-based architects, Peter Cook and Colin Fournier (Spacelab), winners of a project featuring an enormous biomorphic shell which Peter Cook himself defined as "friends alien". The city insisted on building it and to complete it by 2003, the year when Graz had been assigned the prestigious role of European culture capital. The new museum clashes violently with the historical urban tissue, playing its role of synthesis between past and future to perfection. In the original project the shell was supposed to be made from translucent plastic laminate, thus allowing the passers-by to glimpse the interiors of the museum, but due to the limited time and the construction drawings which were developed as the building site phases proceeded, the idea had to be shelved. The plastic material was replaced by traditional acrylic resin panels assembled on a metal structure. The lack of transparency has thus been offset by the novelty of an information panel created thanks to BIX technology. The exterior, a new "two-dimensional exhibition space", has become a communication interface that makes it possible to explore numerous art worlds.
The BIX system, ideated by two Berlin-based architects, Jan and Tim Edler, founders of the Realities: united firm, consists of 930 circular fluorescent tubes built into the façade of the Kunsthaus; each lamp serves as a pixel and may be regulated individually by computer. It is possible, by means of a software, to transmit movie images on the large screen (20mx45m) at a frequency of 20 frames per second. Architecture and technology thus coexist in symbiosis: by day the film surface absorbs the world around it, and by night it diffuses the events staged within, and thus art.