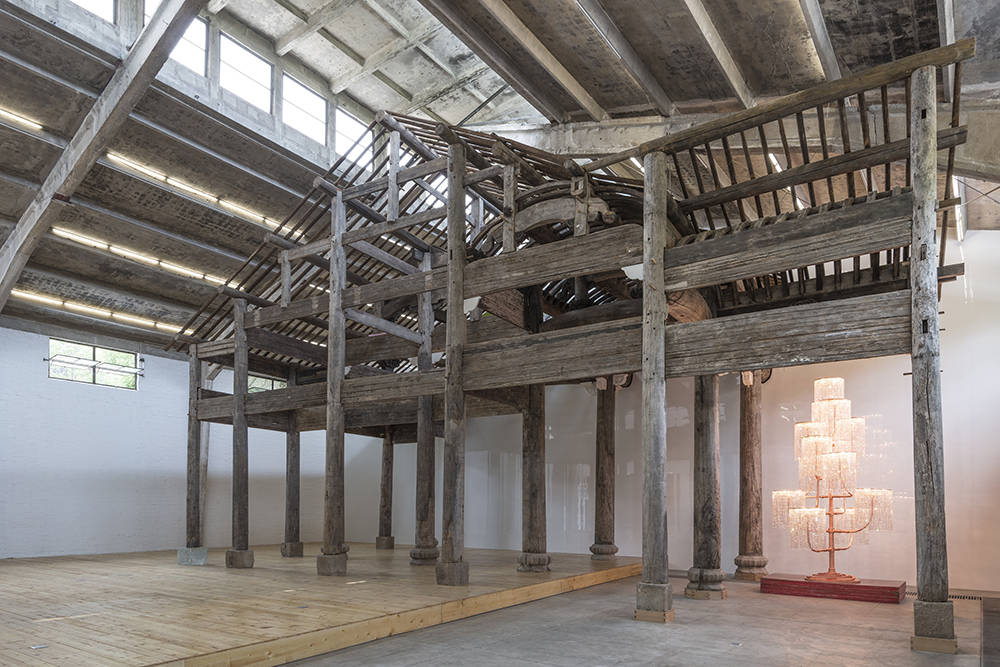 For the first time in his life, the famous Chinese artist designs and realizes a solo exhibition in his home country, following the entire development of the project from conception to realization in situ. Ai Weiwei is an exhibition that take place in two galleries spaces: Galleria Continua/Beijing and Tang Contemporary Art Center.

“When  you invited me to have a show, of course, I felt I should do a show for me, and I put more effort into it.  I’ve never really had a solo show in China. I’ve shown my work several times in different galleries, but never have I made a work specifically for the show…What makes this show special is that I have to make the work I have to be involved, and I have to create a kind of policy or process. The show should be a process rather than a final presentation, because processes are more complicated. For me in particular, it is a learning process and a struggle.”

Two galleries will cooperate hosting Wang Jiaci, (the Wang family ancestral hall) an ancestral temple of Ming age, dedicated to the cult of Wang Hua, an important prince who was reigning during the 6th century A.D., taken as reference by all future dynasties, from Tang to Qing. For hundreds of years, the ancestral temple was considered a sacred place, destined to host offerings and cult ceremonies for ancestors, as well as a place for holding important social activities or meetings and those concerning the Wang family.
Ai WeiWei decided to buy it, because it suited his needs better than any other building, even it cost ten times more that a typical building, due to its large and extremely rare structure. The building has been disassembled into more than 1500 pieces and meticulously re-built inside the two exhibitive areas, crossing the wall that divides the two galleries.
The peculiarity of this traditional architecture lies in its structure consisting of columns and wooden beams, completely independent and detachable from the walls. This building technique, recently developed also in the West, was used in China over one thousand years ago and is strictly related to the Chinese philosophy and thought.
The choice to bring a predominant installation with imposing structure, cultural importance and aesthetic beauty inside an exhibition and two galleries, aimed at setting conditions of “totality” where the environment, which is no longer physical but also temporal and social, becomes an essential aspect of the work. Thus, visitors become part of the project, and their behaviour forms an inseparable part of it. The visitor, invited to enter the two exhibitive areas at different times, is forced to see the work only partially, without ever being able to view and enjoy the entire architectural structure from a single point. The public is invited to walk inside a “social context” rather than a visual one, a condition in which the architectural object was deprived of its original use, thus acquiring a new shape and meaning. The behaviour of those who live this experience becomes, therefore, the focus of the entire project, and even the work itself.
Ai Weiwei focuses, once again, on the importance of human actions within a particular event, not only of artistic, but also of social and public character. The artist’s decision in slip this house between two spaces, one from China and one from aborad that has been in China a long time, belongs from the idea that it is a very different way of presenting an artwork both to the market and to the audience.

“thirty years ago, China invented the concept of the joint venture, akin to “one country, two systems” China itself comprises Mainland China, Taiwan, and Hong Kong. This is how society works: you need to “co-accept” things, measure and discuss, and converse on different levels.”

“I haven’t considered this; I don’t know if it should be destroyed, taken somewhere else, or exhibited again in a new location. I try not to think that much; it is my strategy to think less. I try to concentrate on what I do and it seems to work well, but it sometimes brings a lot of trouble. “

Ai Weiwei was born in Beijing in 1957. He moved to New York City in 1981 and returned to Beijing in 1993, where he still lives and works. His works are exhibited all over the world, in monographic exhibitions, including Evidence at the Martin-Gropius-Bau in Berlin, @Large: Ai Weiwei on Alcatraz in San Francisco (2014), the 55th International Art Exhibition La Biennale de Venezia in the German Pavilion in Venice (2013), Ai Weiwei: According to What? at the Hirshhorn Museum in Washington D.C. Interlacing at the Jeu de Paume in Paris (2012), Circle of Animals at Somerset House in London, Ai Weiwei: Absent at the Taipei Fine Arts Museum in Taipei (2011), Ai Weiwei: Sunflower Seeds at the Tate Modern in London (2010), and So Sorry at the Haus der Kunst in Munich, Ai Weiwei: New York Photographs 1983-1993 at Three Shadows Photography Art Centre in Beijing (2009), and Ai Weiwei at the Kunsthalle Bern in Bern (2004).
Past group exhibitions include the 14th International Architecture Exhibition La Biennale de Venezia at the Palazzo Franchetti in Venice, Beyond and Between at the Leeum Samsung Museum of Art in Seoul (2014), Busan Biennale in Busan (2012), the 29th Sao Paulo Biennial in Sao Paolo, documenta 12 in Kassel (2007), the 1st Guangzhou Triennale at the Guangdong Museum of Art, Guangzhou (2002), Fuck Off at EastLink Gallery in Shanghai (2000), the second Stars Exhibition at the National Art Museum of China in Beijing (1980), and the first Stars Exhibition outside the National Art Museum of China in Beijing (1979).