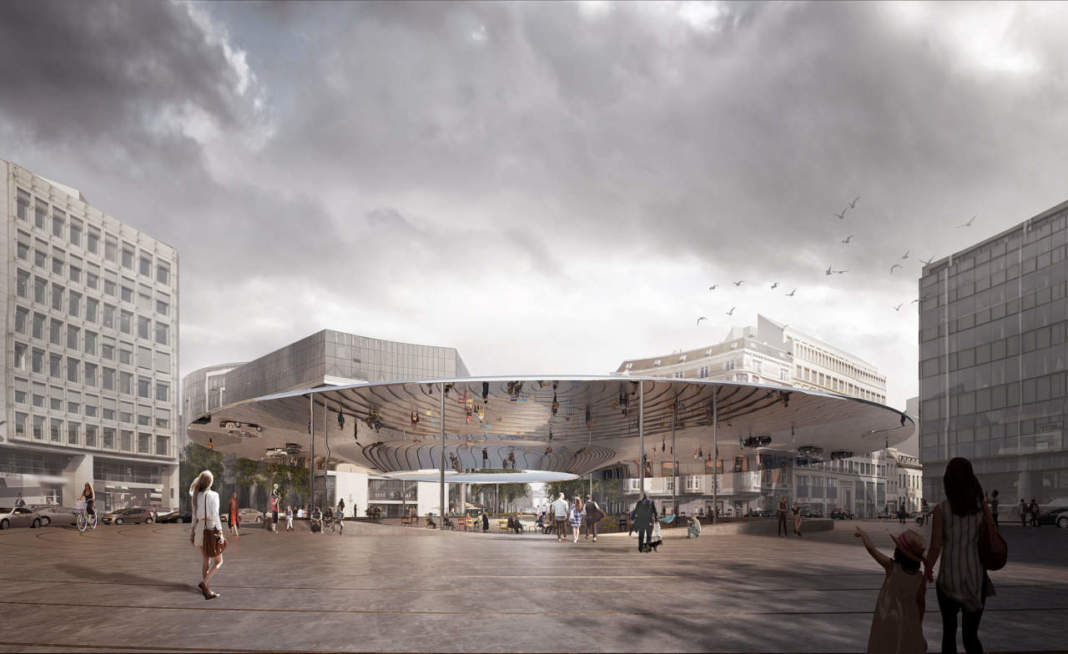 Danish architects COBE and Belgian architects BRUT have won the international competition to design Place Schuman in Brussels, Belgium. The competition was launched in December 2015 by the Brussels Government. An independent jury of experts, presided by Brussels Chief Architect Kristiaan Borret, made its choice, confirmed yesterday by Minister-President of the Brussels Region Rudi Vervoort and Brussels Minister of Mobility Pascal Smet.

Today, Place Schuman is a heavily trafficked roundabout in the heart of Brussels. Surrounded by the main institutions of the European Union, including the European Council and the European Commission, Place Schuman constitutes the entrance to the EU. In the future, it will be transformed into an urban space and meeting point for the entire EU. The project consists of an agora covered with an iconic roof structure reflecting the square and the people below. A funnel shaped opening in the roof frames the surrounding institutions of the European Union on the square. Surrounding the agora, a large pedestrian area with a continuous pavement will connect Place Schuman to the neigbouring Cinquantenaire Park and the bridge of Rue de la Loi over Chaussée d’Etterbeek.

Dan Stubbergaard, Founder and Creative Director of COBE says: “A parliament is usually closed-off to the public, but Place Schuman will be permanently accessible, embracing democracy and knowledge sharing. Here, all citizens of the EU will be united under one roof. The roof reflects the square and the people below, creating a meeting place between nationalities, cultures, languages and genders. The agora underneath the roof will be designed as concentric circles, inspired by the European Parliaments’ hemicycle. The circles continue in the surrounding pavement, emphasizing Place Schuman as the center of European democracy.”

Pascal Smet, Brussels Minister of Mobility, says: ”Place Schuman shows the change this city is making. We are going from a city for cars to a city for people! Schuman will become a real urban square where residents and visitors can meet. Finally this emblematic spot is given the quality and look it deserves. It is now up to the architects to elaborate their projects together with the residents and the European institutions.”
Kristiaan Borret, Brussels Chief Architect, elaborates: “The winning project as proposed by COBE / BRUT shows a fine craftsmanship as it combines the overall complexity of this mission within a consistent and ambitious project. The new Place Schuman will become a pleasant and at the same time welcoming area. A federating project, just as Europe itself.”

Additional studies for the design will be carried out by COBE and BRUT with a view to submitting a permit by the end of 2018 and starting the works in 2019.