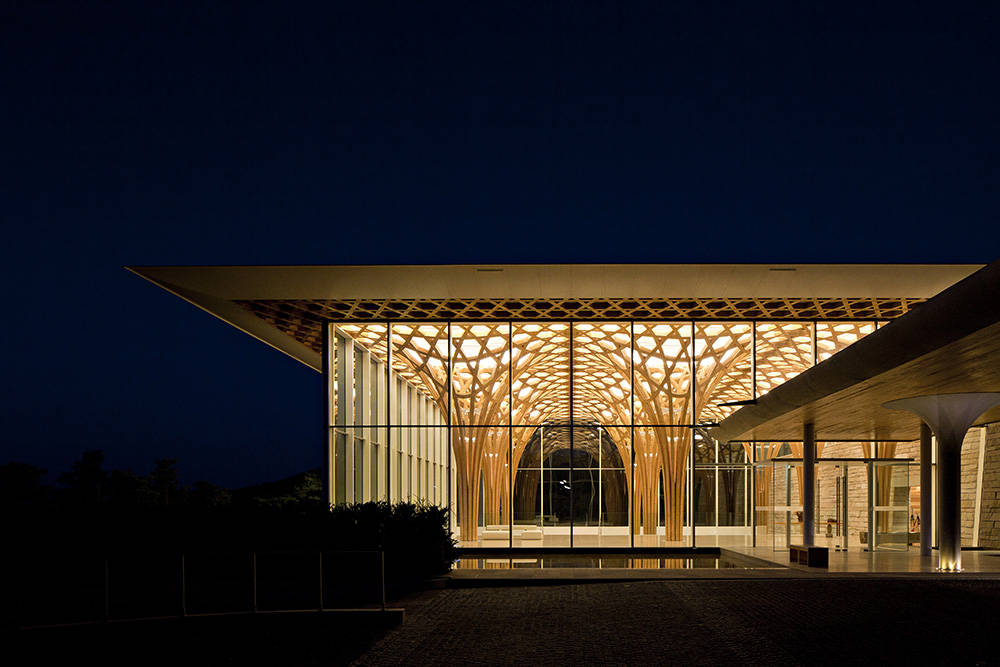 The Nine Bridges Country Club-Clubhouse is a 16,000-squaremeter facility that serves a golf course. It has an underground level and three floors above grade. There is a main building, VIP lobby building, and a structure with private suites. The atrium and the upper portion of the main building include timber columns and a glass curtain wall, while the base is made of stone (random rubble masonry typical of Korea). The timber area includes the reception zone, a member’s lounge, and a party room. The stone podium houses locker rooms, bathrooms, and service areas. The roof over the main building measures 36 x 72 meters. The unusual tree-like timber columns in the atrium reach to a height of three stories. The partial-timber structure was used to conform to Korean regulations that do not allow timber buildings to exceed 6.000 square meters in size. The first floor of the atrium has 4.5-meter-wide glass shutters that open fully.
At the very beginning a design for the free formed surfaces had to be developed, which should serve as a basis for further processing of the geometrical structure. In several reciprocal alignments an innovative supporting system or even sculpture was found which was capable achieving the statistical requirements and fire protection standards.
As for the idea of the construction a woven net with exclusively wood-wood connection was wished while choosing the right dimensions for the cross section with the 60 minutes fire resistance standard in mind.  This approach was reached with the system of the paired overlap joints. In this system two wooden bars/sticks are paired with different power transmission and rigidity transmission values depending of their power direction (traversing outside or inside).
The complex geometries, the spacial load-transferring supporting system, the new software and machining center had to be built within the first three months. Also a new CNC-facility (Computerized Numerical Control) had to be built. This aim could only be reached with a highly motivated team of specialist. The distinguished teamwork with the constructor, the architects and the engineers on site was very helpful to us.
As the building in Metz, the geometrical data of the roof in Yeoju were defined by its mathematically accurately defined master surface. With the help of programs which were generated by ourselves and the firm Design-to-Production data from this surface could be used in the divisions of statistics, fabrication and assembling without loss of information. With this abstracted, but very detailed supporting and structural analysis system we were capable to answer questions concerning details during the whole process of the project and make instant modifications. The precision could be improved essentially by the prefabrication with the approach to mill the wooden sticks three-dimensionally instead of forcing them into a form. This precision in profiling within tenth millimeter range enabled a fast and stress-free montage. After accepting the bid in Juli 2008, there was no time to loose and the roof should be completed by the end of February 2009. The division of the roof construction in five types of elements was the base for a six-digit numerical system, which guaranteed a definite identification for every single element.
As for the construction material glued-laminated timber in spruce were used. Unmachined parts were bought in straight, single curved, duple curved and double curved and twisted forms.
With a computer program the opimalised amount of needed material was calculated within the most minimal units of work hours and material loss. A lot of time could be safed because we were able to work with the production batch of 12, in comparison to the Center Pompidou in Metz.
From the beginning of the project we worked on a mounting concept. At the same time we had to conduct experiments with the novel connections. The 4500 building elements were produced on a 5-axial guided Kruesi-CNC-facility. With this machine it was possible to produce the free formed elements with the needed precision. The machine conform reconditioning of the geometrical data with the CAM was complexed work and extremely elaborate. During three month the programmer as well as the machine operator worked three working shifts.
Subassembly in the tents
The subassembly was started with a presorting of the single building elements (per cap 138 pieces). The former plates were element-tables which were produced by the CNC machine. Those were built exact to the millimeter with a building area of 81 sqm. In this way the single building elements were arranged in five tiers and tied positively. With the predetermined order of the sub-assembly the single elements arrange themselves automatically. For the joints we used mountings and grains to connect every building component element.
This method enabled us to connect the building components at every position of the construction. Berner Fachhochschule in Biel did some test series to test the efficiency of the connections. Steel is needed only for the connection between the stem and the cap and between the single caps.
Because some connections are visible in the restaurant area and the construction for the roof should present itself like a piece of design-furniture here again the accuracy was very important.