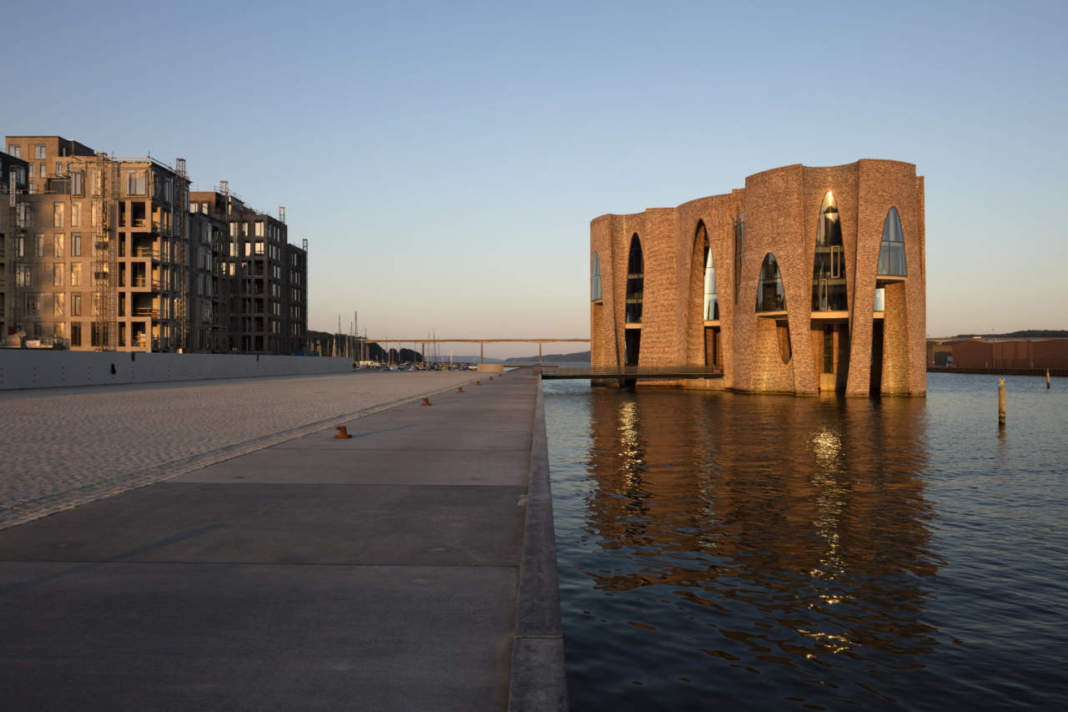 Fjordenhus is the first building designed entirely by the polyhedric artist Olafur Eliasson, Sebastian Behmann and the architectural team Studio Olafur Eliasson.
Beginning from the Serpentine Gallery Pavilion 2007, designed together with Kjetil Thorsen, then Your rainbow panorama, a 150-metre circular, coloured-glass walkway situated on top of ARoS Aarhus Art Museum, and later with the Harpa Reykjavik Concert Hall and Conference Centre, Olafur Eliasson has extended his limits to the architectural field.
In 2014 a new international office for art and architecture, Studio Other Spaces was founded by Olafur Eliasson and Sebastian Behmann and today it is formed by over one hundred people, from craftsmen and specialised technicians to architects, archivists, researchers, art historians, cooks, and administrators, capable of giving birth to an amount of worthy and special artworks, known all over the world.

Fjordenhus represents the container of these creative minds, a new headquarter for the Studio Olafur Eliasson, that it was opened to the public on last 9th of June, aiming to reflect the whole philosophy of the company through its architecture that consists of a ‘work of art‘.
Rising out of the water, Fjordenhus forges a striking new connection between Vejle Fjord and the city centre of Vejle, that is one of Jutland peninsula’s thriving economic hubs.
As one moves from the train station towards the harbour, Fjordenhus comes into view across the expansive plaza of the manmade Havneøen, a mixed-use residential and commercial area currently in development. From here, residents and visitors can access the ground floor of Fjordenhus via a footbridge or stroll along the jetty designed by Günther Vogt. Once got in, the building’s public, double-height entrance level welcomes the visitor, with its strong relation to the water, drawing attention to the plane where the structure plunges beneath the surface, and its curved edges framing glimpses of the surrounding shores and harbour.

The building is permeated by the harbour itself, and its two aqueous zones are visible from viewing platforms. Both the architectural spaces and Eliasson’s artworks engage in a dialogue with the ever-changing surface of the water.
Formed by four intersecting cylinders, Fjordenhus soars to a height of twenty-eight metres. Rounded negative volumes have been carved from its facades of custom-glazed brick to create an extraordinary architectural statement of complex curved, circular, and elliptical forms, torqueing walls and parabolic arches. In its unique setting, that is a hybrid of natural and industrialurban contexts, the building highlights Vejle’s future as a centre not just for today’s generation but also for generations to come.