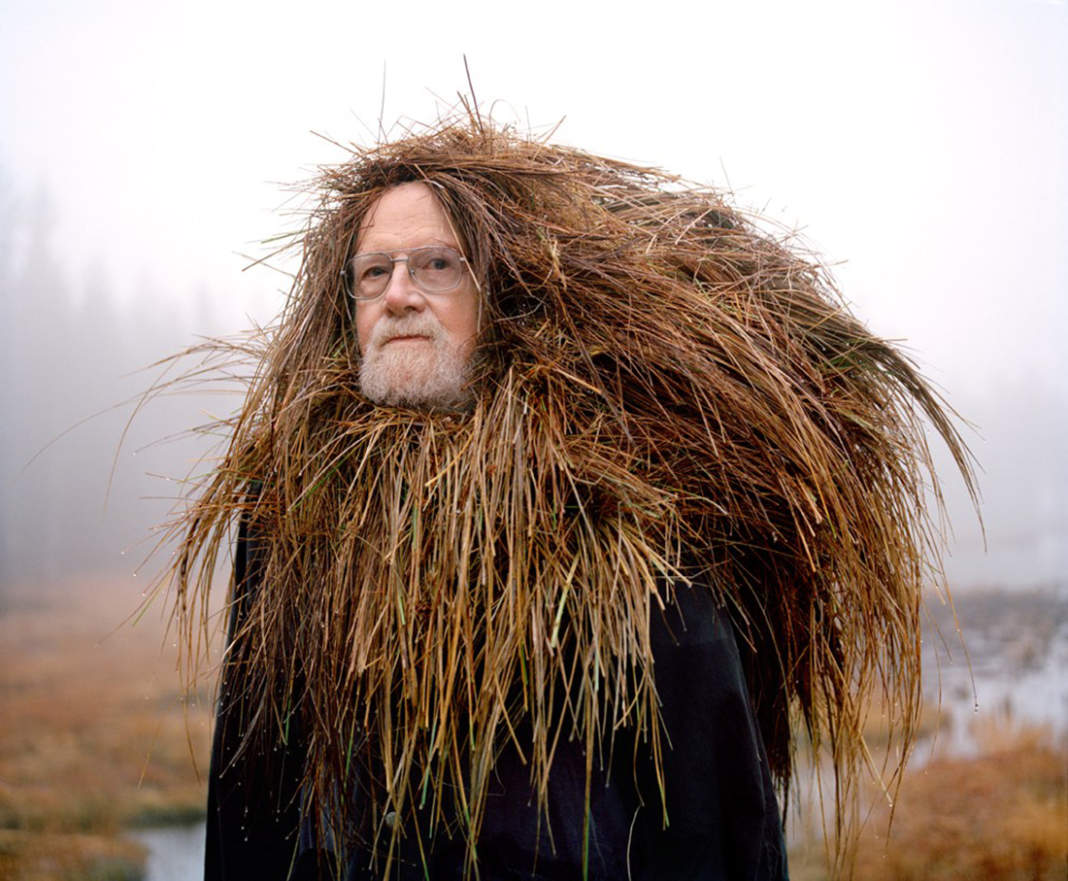 Eyes as Big as Plates is a photography series produced in collaboration with over fifty seniors from ten countries. Starting out as a play on characters from Nordic folklore, the series has evolved into a continual search for modern human’s belonging to nature. In the photographs, each character inhabits the landscape in wearable sculptures made from natural materials. Part sculpture, part installation and part photography, Karoline Hjorth (NO) and Riitta Ikonen (FI) work together from beginning to the end of the process with their different complementing skills.

Karoline is the photographer in the duo while Riitta works mainly with the creation of the wearable sculptures in the images. Each image in the series presents a solitary figure in a landscape, dressed in elements from surroundings that indicate neither time nor place. Nature acts as both content and context and the characters literally inhabit the landscape wearing sculptures made in collaboration with the artists. After meeting and getting to know each other over an informal interview, the inspiration for the wearable sculpture takes shape as a dynamic process between the trio. The process is documented throughout the day and posted later at the project site www.eyesasbigasplates.com.

To allow for the time to pass freely on a shoot day is important to the process and vital for creating the atmosphere for the participant to feel immersed in both the wearable sculpture and the surrounding landscape. The title Eyes as big as Plates is inspired by characters from Scandinavian folklore and is a tribute to imagination and curiosity. During all stages of the production, the process is thoroughly documented and considered by the artists to be just as valuable as the final images. So far the series include works produced in Norway, Finland, Iceland, Sweden, The Faroe Islands, France, UK, US, Japan, Greenland, South-Korea and Czech Republic, with Portugal and Spain scheduled for 2017. As the project continues to cross borders, it also aims to rediscover a demographic group too often labeled as marginalized, and to generate new perspectives on who we are and where we belong.

The photography book is an edition of 2000 copies, each unique and handmade. It is designed by the Swedish designer Greger Ulf Nilson, published by the independent Oslo based publishing house- Press Forlaget and distributed by DAP. It will be available to buy directly from the artists through the project website: www.eyesasbigasplates.com and at bookstores around the word.

Exhibitions
The series is currently touring with the Norwegian National Museum and has previously been shown at Museum of Contemporary Arts Kiasma (Finland), Bogota International Photo Biennale (Colombia), Art Toronto (Canada), NADA Miami (US), Museum Sinclair-Haus (Bad Homburg), Fotogalleriet (Oslo), Pioneer Works/ Recess (NYC), Seibu Shibuya (Tokyo), Bemis Center for Contemporary Arts (US), The Finnish Institute in Oslo, Paris and Stockholm, Palazzo Borghese, Gallery Del Cembalo in Rome, Italy, gallery FACTORY in Seoul Korea, Glasgow Centre for Contemporary Arts and the National Museum of Greenland amongst others. Currently the series is on exhibit at the Nordic House in Reykjavik and Kunsthall Grenland in Norway with further exhibitions and international book launches to be announced.

Press
The series has been covered widely in the press, including Huffington Post, BBC, Artlink Australia, Life Magazine (Hong Kong), Quotation (Japan), Conveyor Art magazine, SVA Magazine (NO), Fanfare (NO), NRK Nasjonalgalleriet, amongst others.
Eyes as Big as Plates won the British Society of Gerontology’s Photocrowd award in early 2016 and the Nordic Crowdfunding Alliance’s ‘The Best Norwegian Crowdfunding Campaign’ in the Culture and Arts category for 2016.

About the artists
Karoline Hjorth (b. 1980) is a Norwegian photographer, artist and writer. She completed her MA at the University of Westminster (London) in 2009 and is currently based in Oslo. Her photographic work has received the Deloitte Award at the National Portrait Gallery in London and has been exhibited and published internationally. Her first book Mormormonologene was published in 2011, with her next book Billett Merket, a portrait series on online daters coming out in 2017/18 (Forlaget Press, Oslo).

Finnish artist Riitta Ikonen(b.1981) graduated from the Royal College of Art in 2008, with an MA in Communication Art. Ikonen’s work, encompassing wearable sculptures, performance and photographs has since been in curated solo and group exhibitions in Kiasma, Tate Britain, NADA Miami, and London 2012 Olympic Park amongst others. She was nominated for Ars Fennica, Finland’s biggest art price in 2014, and exhibits, lectures and performs internationally.