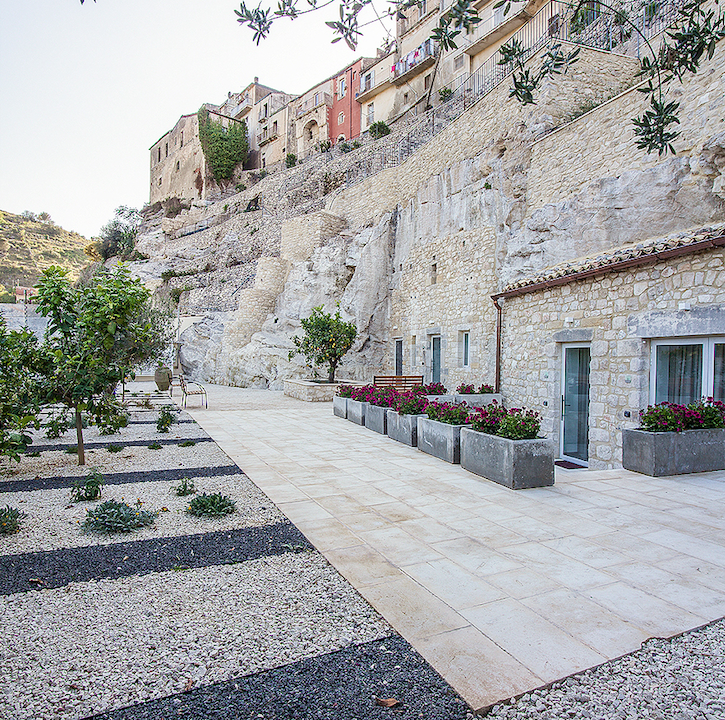 The essence of Mediterranean culture is summed up in the restoration of the San Giorgio Palace Hotel in Ragusa Ibla. The hotel building in all its monumental splendour stands in the oldest part of the Sicilian town, where the path of history and the marks of the civilisations that have followed one upon the other on the island are palpable in every corner of the intricate labyrinth of streets. The 18th-century building has five floors. Partially renovated just after the turn of the millennium, the building was recently subjected to a second renovation project, focusing on the two levels below the three floors that had been transformed in the previous restyling project, the terraces and a number of older volumes excavated right into the rock. In the new project, by Studio Daaahaus, the number of hotel rooms was increased from seven to thirty rooms in the building and the grottos. The big terraces overlooking the landscape were redesigned and reused, preserving species native to the area and adding a Sicilian citrus grove, restoring the old garden to its original splendour so it can once again recite its infinite poetry. The rock and the traditional dry stone walls of Ragusa, underlined with light effects emphasising their material nature, reclaim the identity of the place, which was a multicultural centre founded by ancient Italic populations prior to the ages of Roman and Byzantine domination, followed, as in a slow process of stratification, by Arabian, Norman, and Swabian cultures, up to the days of the houses of Anjou and Aragon. Every stone is living matter testifying to the splendours of the past. The architects entrusted with restoration and expansion of the San Giorgio Palace Hotel saw this as their starting point. "The key concept behind the interior design," they explain, "was underlining the building’s architectural features", the intrinsic qualities and formal aspects of the building. "The spaces are conceived and designed with sober finishes and furnishings to create a comfortable, welcoming atmosphere". The minimalism of the interiors contrasts, in other rooms in the hotel, with valuable antiques made by traditional local artisans, whose work is reflected in the features of the building. In the masonry construction, the walls plastered in light colours underline the structural elements, accentuating their rough manufacture, while the flooring, large slabs in warm hues of dove grey with only minimal grouting, creates the sensation of walking on a single, uniform surface. The doors and the wall coverings maintain the same colour palette, creating highly refined yet perfectly simple spaces. The Daaahaus group sees the building itself, and its relationship with its surroundings, as the key theme of the design. Rather than adding additional decorations to the built space, they limited their syntactic paradigm to an attentive reinterpretation of the building’s original forms and materials. The rooms are furnished entirely with custom-designed items featuring wooden finishes. The wellness area and bathrooms, which feature rimfree fixtures for practical and sanitary reasons, represent one of the key parts of the restoration project. The wall coverings in vintage style take up only minimal space and make the room an elegant, relaxing place.

Duka shower cabins turned out to be the ideal solution because of their ability to make daily personal care rituals more pleasant while at the same time improving and facilitating the tasks of the hotel’s staff. The prima S 2000 model selected for the project and supplied to the client by Chiarandà Home is not only simple to assemble, with versatile configurations for adaptation to customised installations, but permits removal of the lower part of the doors for easy cleaning. The ProCare glass is treated with a magnetronic deposit to prevent the appearance of unsightly signs of corrosion or formation of an opaque patina, so that the glass stays shinier for longer.

The lighting design, also by Studio Daaahaus, employs small light fixtures which are retractable or installed flush so that they will not alter the compositional whole that has been achieved or the architecture of the spaces. On the ground floor, grottos contain a wellness area featuring a big hydromassage tub, a swimming pool, and a cascade of water. Here too, the architects’ work is very precise, staying faithful to the style of the rest of the composition. The new generation LED lighting with the RGB system underlines the material nature of the rock with its intense, bright colours, creating a pleasant, relaxing atmosphere.

Guests are welcomed at the entrance by a long natural tunnel: thirty-three cool metres in which a mysterious echo invites the soul to give in to the enchantment of the place. This attentive restoration project preserves the building’s original charm and successfully combines the new with the old, the nostalgic character of Mediterranean views with the latest new technologies and the contemporary idiom. A hilltop park - four thousand square metres of greenery, replanted with local flora - makes a vacation at the San Giorgio Palace Hotel even more enjoyable, immersed in the scents and colours of Sicily.

CEA Design for the Villa A in Catania