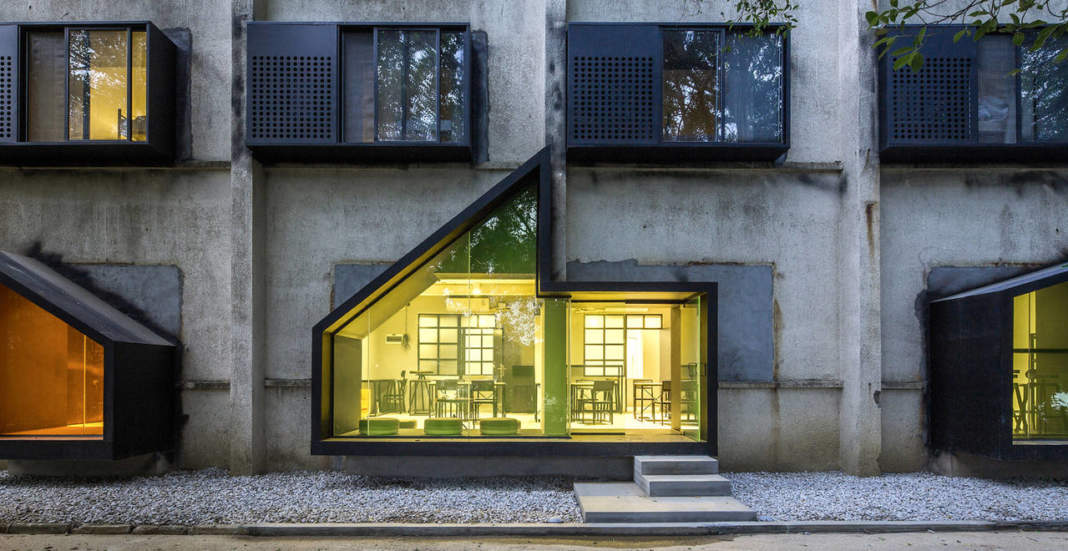 Built in the 1989 in east Shenzhen, the frontier of economic reform of China, Honghua Dyeing factory had witnessed the city’s heyday of industrialization. However, the 8-hector industrial site lying in the green valley was abandoned in 2003 due to the city’s economic shift from manufacturing to innovative and cultural industry. In 2012, the local authority decided to transform HongHua factory to an urban incubator for art and culture, in the ecologically reserved coast territory of east Shenzhen, which already became a new tourist and leisure district of the fast-expanding city. O-office architect was commissioned to the renovation work of this post-industrial ruin. Within the master plan, the former #2 workers’ dormitory was planned to be rehabilitated to a youth hotel. Locating on the north hill-side of the valley, the 4-storey masonry-concrete building originally housed the first batch of immigrant labors that moved out from their hometown to work in this modern city. In contrast of the decay of the former industrial space, the flourish Chinese banyans in front of the building are seemingly symbolizing the rebirth of the site.

Considering the tight budget of the project, O-office tried to minimize the new intervention and therefore maintain the originality of the building in all aspects. Inside the old structure, the only intervention is the re-equipment of the building infrastructure in the inner corridor, including vertical shafts and horizontal piping covered by the new ceiling. The only intervention on the exterior façade is the black steel case-window on the original opening. The case-windows on the 1st – 3rd floor are equipped for the guestrooms, offering the space for air-conditioning units, and extending the room to banyan trees’ huge crowns, which almost umbrella the whole dorm building.
The original dorm-rooms on the ground floor has been reconstructed to form two larger space for the hotel’s public function, such as a bar, an open kitchen and common space, through subtle alteration of the original structure. Steel case-windows of these public spaces evolve into a sequence of small cozy-house-like colorful openings viewing to the surrounding nature. Modest in the new intervention, the project gives a new-fashioned spatial experience yet within the memory of this once ruined structure.