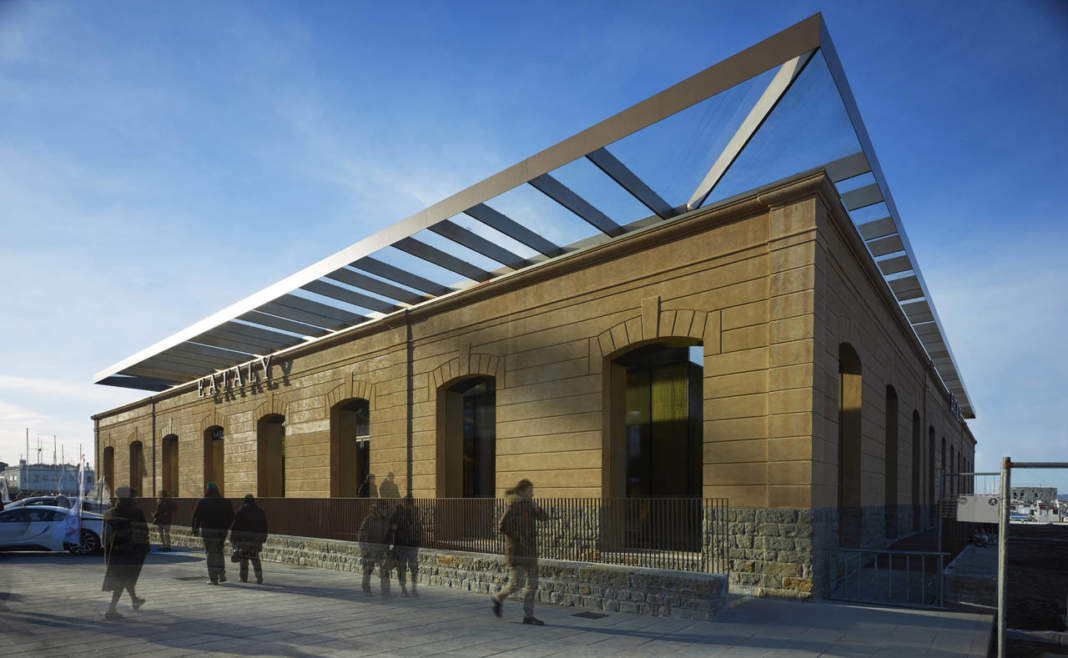 Florence-based ARCHEA ASSOCIATI has designed a major new restoration project, turning a former wine warehouse in Trieste into a new Eataly store, which was officially opened to the public today, Tuesday, January 17.

“Every architect’s dream is to defy the impossible. One such dream is to build a “hole in the water,” something that is, of course, utterly un-doable. In a way, we have done just that in Trieste because we are practically in the sea. In taking on the former wine warehouse, we had to deal with a building of no particular architectural merit, but a great deal of historical value. We built another glass building inside of it, which was easy in terms of imagining the composition, but highly complex in its architecture and construction. A great area was carved out of the sea to gain a new space, taken from the sea itself. The outside image is that of the 19th-century wine warehouse; one of history and tradition. At its edges, you can glimpse the glass cube inside, which faces the sea and lets you see that there is a new life within.” Marco Casamonti

Archea’s architects welcomed the challenge of creating a contemporary project on a historical heritage building. Their redevelopment and conversion plan protects the existing building while maintaining absolute respect for its city setting. The plan leaves the original volume unchanged, placing within it a new, all glass architectural structure connected to the existing perimeter by walkways suspended over the water.
The new structure is completely independent; translucent and ethereal, its proportions follow the rhythm of the wall section as determined by the original facade.

The physical separation between the new “building” and the historical face creates a powerfully evocative space between inside and outside where water flows in large pools. The edges of the warehouse walls and its windows and doors are reflected in the glass enclosing the space, letting us see what is going on inside. The new structure spreads over four floors, like a theater set for food. A completely underground floor is for parking. Natural light reaches the next floor up, lower than street level, through a gap between original building envelope and the new one. This floor and the ones above it are for Eataly’s retail business. The ground floor, 80 cm above street level, maintains the historical safety margin that keeps it above high tide. The new mezzanine, though at a higher point than the perimeter walls, reaches the top level of the original pitched roof, which was destroyed. A large window facing the sea affords a remarkable view of the port of Trieste.

Featuring a majestic double staircase of COR-TEN steel, the building’s atrium is like a theater foyer. The staircase, which connects the three retail floors, has two spectacular pools of water at its base. The atrium also has a large wall clad in back-lit glass bricks whose form and material suggest the interior coverings of the historical tanks where wine was once stored.

Archea Associati
www.archea.it / www.archea.cn
Founded in Florence in 1988 by Laura Andreini, Marco Casamonti, and Giovanni Polazzi, joined in 1999 by Silvia Fabi, Archea Associati is now a network of about 100 architects operating in six locations in Florence, Milan, Rome, Beijing, Dubai, and São Paolo. The firm’s areas of interest and research run the gamut from landscapes to cities, buildings, and design and also encompass graphic design, publishing, exhibition, and events, all focused on architecture.
The shift in scales and their complementary nature, ranging from criticism to construction sites, let the firm integrate its approaches while engaging in all of a project's compositional forms.
Some of its most important projects include: the Municipal Library of Nembro (Bergamo), UBPA B3-2010 Pavilion World Expo 2010 and GEL, the Green Energy Laboratory in Shanghai in 2010, the expansion and renovation of the Perfetti Van Melle factory in Lainate, near Milan, the Antinori Winery in the Chianti Classico region in San Casciano Val di Pesa, the Yanqing Grape Expo near Beijing, the Li Ling World Ceramic Art City in China, and the Colle Loreto residential complex in Lugano. Projects currently under construction include the Forevergreen commercial and residential