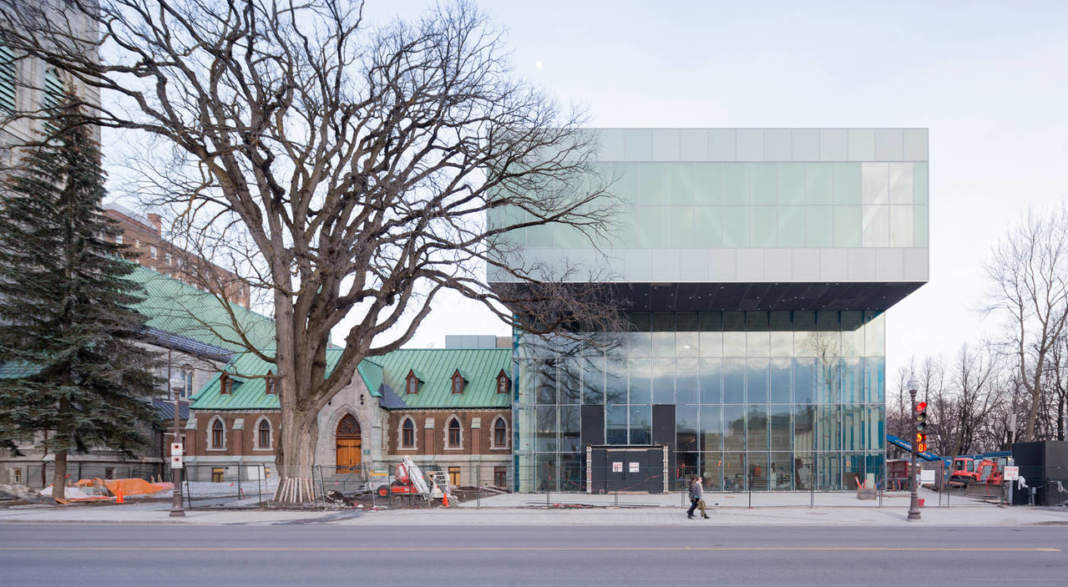 The Musée national des beaux-arts du Québec (MNBAQ) has announced that it will open its new building, the Pierre Lassonde Pavilion, on June 24, 2016. Designed by OMA (Office for Metropolitan Architecture), the pavilion will transform the 83-year-old institution—the first museum established by the government of Québec—while drawing together as never before the street life of central Québec City and the landscape of the scenic Parc des Champs-de-Bataille. Increasing the museum’s space by 90 percent, the new 14,900-square-meter (160,382 square feet) pavilion will provide a spacious and distinctively contemporary gateway to the institution’s existing complex of buildings.
The MNBAQ, whose mission is to promote and preserve Québec art, from the 17th century to contemporary periods, and to showcase international art in Québec City, will inaugurate the new pavilion with six exhibitions showcasing their impressive collections of contemporary and Inuit art.
“The world heritage site of Québec City now has a new landmark,” stated Line Ouellet, Executive Director and Chief Curator. “Lucid and ingenious, the Pierre Lassonde Pavilion simultaneously stands out on its site and weaves itself into its surroundings, bringing out the potential of the urban situation with a logic that is as impeccable as it is unexpected. With its spacious exhibitions galleries, auditorium, café and other amenities, it will enable us to realize our museum’s highest possibilities.”

“Our design stacked three gallery volumes in a cascade that continues the topography of the park. The activity of the city extends below, providing a new point of interface between the city and the park,” stated Shohei Shigematsu, OMA Partner leading the design. “Art becomes a catalyst that allows the visitor to experience all three core assets – park, city, and museum – at the same time.”
Realized in collaboration with Provencher_Roy architectes of Montréal, the Pierre Lassonde Pavilion faces the main artery of Québec City’s Grande Allée. Behind the new pavilion, the three existing pavilions of the museum (dating from 1867, 1933 and 1991, respectively) stand within the historic Parc des Champs-de-Bataille. The Pierre Lassonde Pavilion connects with this complex through a 130 meter (427 feet) long below-grade passageway while presenting a transparent façade directly on the Grande Allée, where it creates a new public plaza.
Within the pavilion, column-free galleries for installations from the permanent collection and temporary exhibitions, an auditorium, a café and a museum store are housed in three volumes of decreasing size, which are stacked so that they rise in stepped tiers from the park to the streetfront on Grand Allée. A Grand Hall that is 12.5 meters high (41 feet) faces Grande Allée, where the topmost tier’s dramatic cantilever of 26.5 meters (87 feet) shelters an urban plaza. Orchestrated views from a monumental spiral stair and an exterior pop-out stair orient the visitor to the park, the city and the rest of the museum. On top of each of the volumes, roof terraces provide space for outdoor displays and activities.