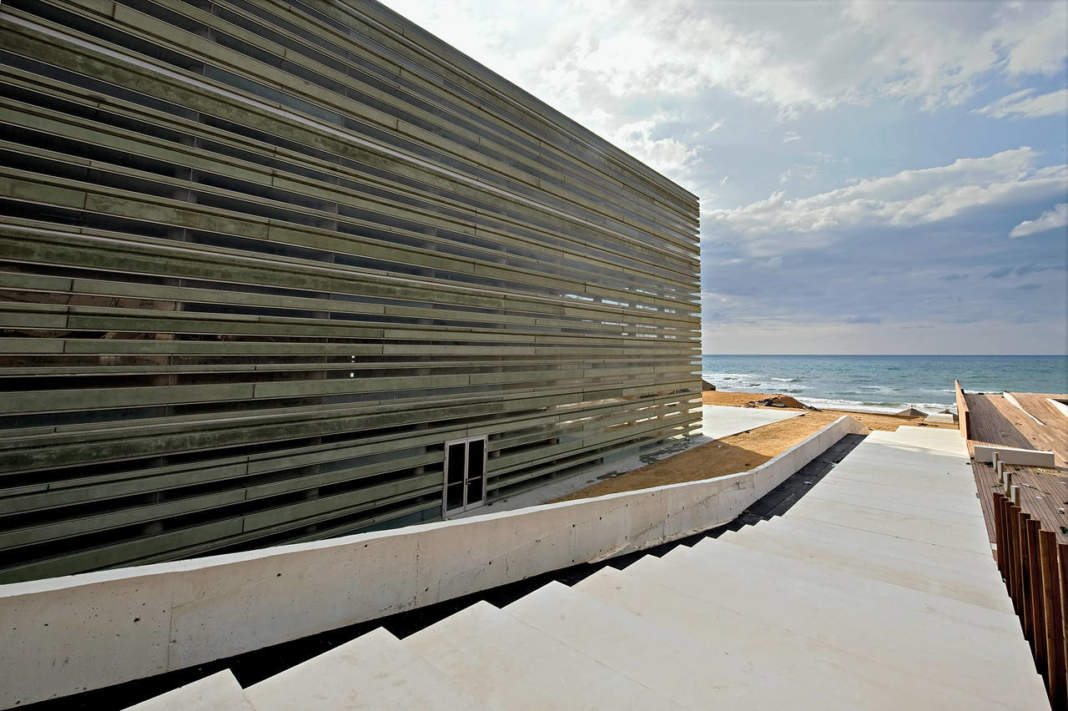 A homeland for all sailors and shipwrecked people. Conceiving a place that is not virtual but real, to dedicate to Peace, is an undertaking of huge commitment and profound ethical intensity.Peace is a place of the spirit, it is an aspiration, it is tension and utopia! The projection of a desire into the future, it is also a hope that our children, the future generation, will have better lives. Peace, therefore, is not something that can be circumscribed by a shell. It is a feeling of fullness and serenity that a space, an architecture is able to communicate. I thought of a stratification, a construction which represented Time and Patience. Stratification of alternated “material” of places which have suffered the most. Concrete composed from different sands and inert material, alternated and laid on top of one another. A base of stone which keeps the building raised above the meeting area, from which access is gained via two long staircases in a rest area. The latter’s dimensions and height, with the light filtering in from above, help us forget the anguish in the world, and give us the positive outlook we need when meeting other people. The external volume is made up of stratified concrete alternated with layers of translucent glass. During the day, the transparency of the glass will filter the light inside, and at night it will return it to the exterior, bestowing upon this magical image a spiritual and tangible message that the building wishes to evoke. The Centre of Peace is a parallelepiped obtained from the stratification of irregular planes of glass and concrete, laid upon a monolithic base: at one end of this there is the car park entrance, at the other the pedestrian entrance. At this point the basement becomes a huge square, a clean plane cut longitudinally by two single symmetrical ramps, which take you inside the structure. This dark area leads to a double-height open, light space where the reception is located. From here, the alternation between layers of light and darkness is visible. The remaining floor area is designed to accommodate shows of various genres. The remaining six floors – which cover a surface area of some 600 sq.m., with a floor height of 3.4 m – can be accessed via stairs and lifts