Home No category Pedestrian connections to the Castle of Rivoli 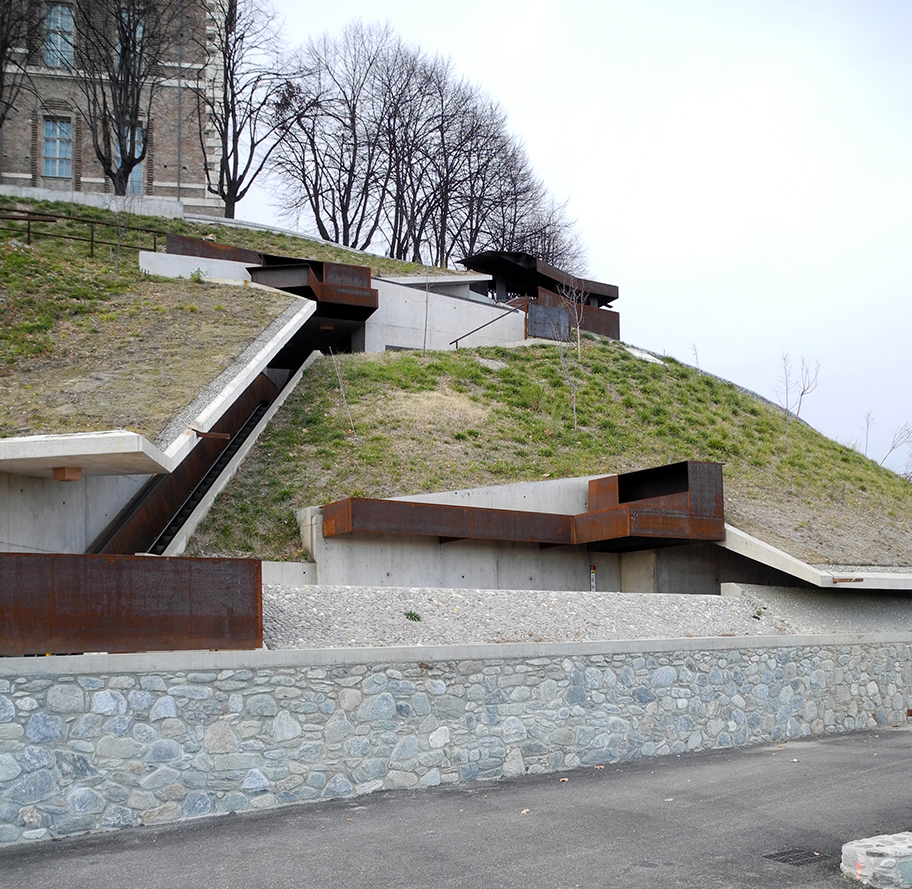 The Architecture of Hubmann Vass Architekten in Rivoli invites for an extraordinary perceptual experience. When one approaches from the old nucleus of Rivoli, merely the grandiose mass of the unfinished Juvarra castle is discernible in distance and this impression remains until the foot of the hill is reached: the castle disappears at this point and an ascending path begins which will reveal surprising spaces and unexpected vistas in just a few minutes. A plate made of light coloured concrete raises the foot of the hill thus forming a long porch that invites one to enter. This resolute gesture of precise cut and incision in the hill follows the entire ascending course: one penetrates deep into the hill, nevertheless it never loses the direction or the visual contact with the surroundings.

In an intelligent manner, Hubmann & Vass wanted to interpret the topic of mechanized ascending path as a “picturesque” course through a garden-orchard, which will grow in time and change, breaking with the axes and the strict perspectives of the Baroque architecture. The experience of non-linear movement over the terrain that follows a series of discontinuous situations leaves an impression of being very contemporary, but very old as well: in the imagination of an architect, associations of exhausting ascent to the Acropolis in Athens are evoked, of art of forming picturesque English and Chinese gardens, of peripatetic sculpture by Richard Serra, and of intense contrasts of light in Roman cryptoporticos. Each and every step brings about new surprises – through variation of spatial proportions; through intensity of light which comes from the side at one moment and from above the next; through scenes of different vistas of the old town centre – all the way until it reaches the top where the course ends in a spectacular “belvedere”: and while vistas were directed to a precisely chosen point of the nearest surroundings until here, now the architecture of this small, sophisticated pavilion frames the context of broader panorama of the Torino Plain, valorizing the Baroque axes that connect the Castle of Rivoli with the Basilica of Superga.

On the contrary, during descent new galleries are found, new landscape moments are offered until one finds exit path in an impressive “cave,” located in the deepest point of the incision into the hill. The remarkable tactile quality of the architecture of Hubmann & Vass is contributed by materials: while the light coloured concrete was chosen as a powerful mass that illustrates efforts of excavating (according to a masterly direction of soil engineering), lateral surfaces of the path are covered with corten in form of subtle stripes which are bent like real origami thus creating small bulges on several strategic points.

In choosing the materials, as well as in design strategy, Hubmann & Vass show that they have absorbed in a not banal way experiences and messages of contemporary sculpture (incisions in the ground by Michael Heizer, sheets of steel by Richard Serra, but also the works by Jorge Oteiza) that carefully create relation between passing through and observing the landscape. Like the most excellent installations in the field of land art and minimal art, the site is not represented but redefined through the artistic action: arrangement of sculptural elements, incised or light emergent in the profile of the hill, directs attention of the observer towards the topography of the landscape he passes through.