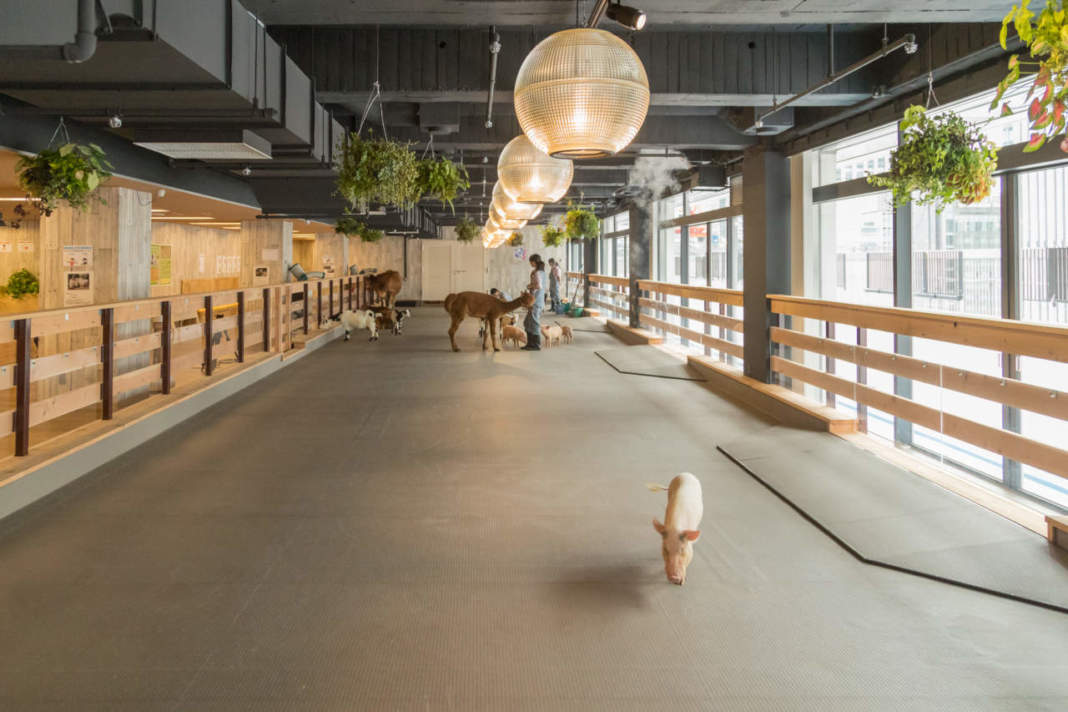 Tokyo is a curious city. Quoting Robert Venturi, it is a place of complexity and contradictions. Tokyo is a city where you can reach the 13th floor of a massive building and meet cows, horses and pigs while drinking a delicious espresso.
It is bizarre, but it is true. Personnel dispatch company Pasona Group Inc. recently moved its headquarters into a renewed building near Tokyo Station, in the Otemachi district. The so-called “Otemachi Bokujo” host around 60 animals of eight species, including cattle, goats, flamingos, owls and an alpaca.
Like in the Noha’s Ark, the animals share this space in peaceful cohabitation. Human staff takes care of the animals entertained and clean up after them. The farm also offers seminars on dietary education, ice cream-making lessons, seminars on dairy farming and other events, allowing participants to interact with the animals. Featuring the farm creatures, Pasona hopes to attract the interest in careers in agriculture and dairy farming, thus forming the future ranchers. For this reason, children are the main targets of this impressive project.
Designed by the international architectural firm Richard Bliah Associates – based in Tokyo – this project involved the need to solve many difficult challenges, such as bringing the animals at the top of a building in a dense urban area, or the disposal of animal’s stool. Together with the impressive ranch, R.B.A. designed 57.000 sqm of offices, shops, workshops, gym, event and multipurpose spaces, distributed along the 13 floors of the building.

Pasona’s mission is to create a society in which each person can balance work and life. Yasuyuki Nambu - Pasona Group CEO – founded this company in 1976. “At that time” - he explains - “people had no alternatives: be a regular worker, and exploited for the rest of your life”. By offering to workers more choice and flexibility, Pasona created the so-called freeters and changed radically the Japanese society.
In 2010 Pasona gained global acknowledgment by creating the first "Office farm" in Japan (called Pasona O2), allowing employees to grow and harvest their own food at work. This time the experiment makes a step forward, testing the behaviour of humans and animals brought together in a dense urban environment. What will be the next step?