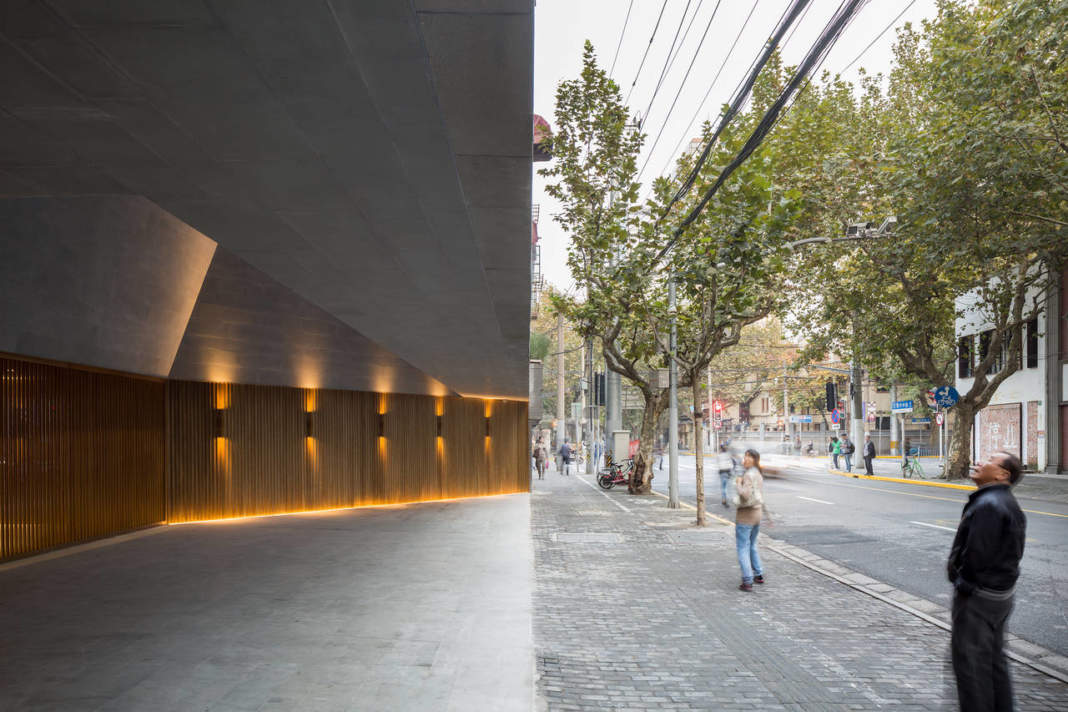 Occupying the site of a former theater dating from the 1930s, the existing building had undergone a series of renovations over the decades, during which much of the original character and architectural detail had been stripped away. The resulting building as we found it had become a pastiche of various styles and programmatic uses. As such, the primary design challenge by Lyndon Neri & Rossana Hu was to recall the clarity and unity of the historic building in all its grandeur, while creating an architecture that would not only be relevant today, but have the potential to become a lasting and significant landmark in modern Shanghai.

From the street, the building reads as a heavy stone volume hovering just above ground level, lodged firmly between its neighbors, it announces its presence unabashedly. Encased entirely in stone, the upper two floors relinquish any outwardly visible openings in favor of vertically carved apertures. Drawing inspiration from the theatrical acts which take place within, the carved spaces of the interior and exterior atriums were conceptualized as series of dramatic scenes; scenes of varying spatial and lighting configurations are experienced as one moves throughout the space, intensifying as one explores deeper into the building. Several apertures takes advantage of the changing light conditions throughout the day to create an ever-changing and dynamic environment while supplemental evening lighting mimics these conditions for added drama.

To guide theatergoers into the building, fluted bronze walls—reminiscent of a theater curtain cloaking the drama of the main stage behind it—provide a sense of weightlessness in contrast to the heaviness of the stone above.

The entry and ticketing area are recessed back from the pedestrian walkway in order to create a covered plaza that is not only a shelter from the elements, but gives public space back to the street and begins to blur the boundaries of public and private. As such, the public at large, or any casual passerby, is permitted to glimpse and experience part of the building’s theatricality, with or without a ticket.