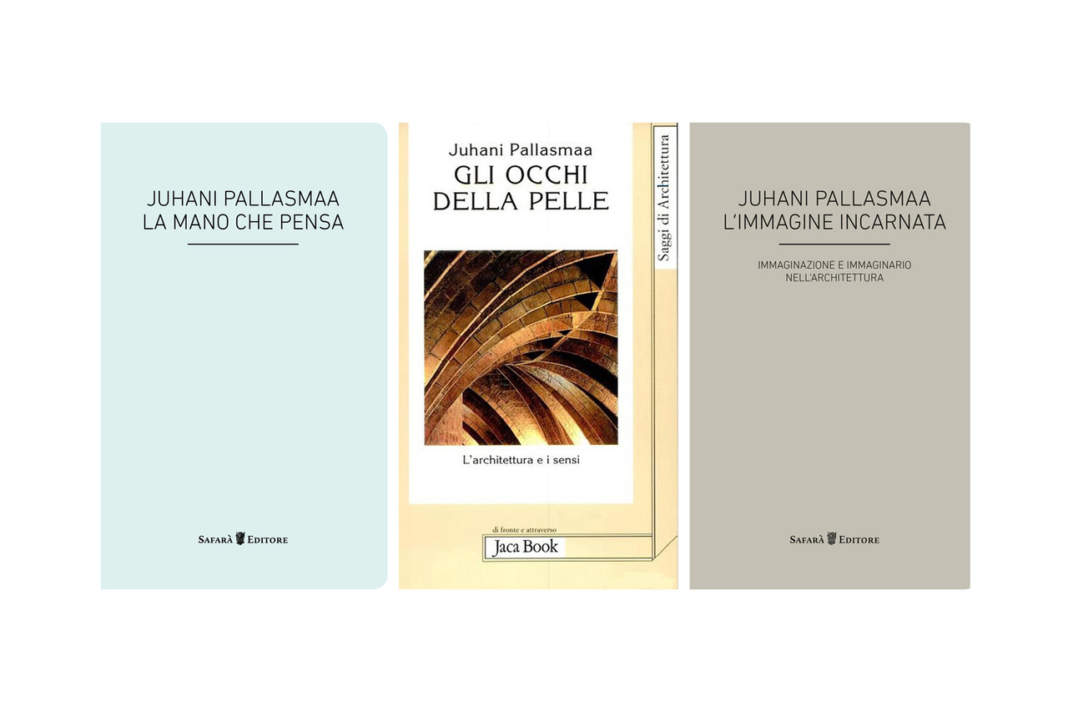 Architect and theoretician, among the most coherently modern ones without any modernistic fundamentalisms and one of the most fascinating explorers of the complexity of architecture, in art and in life, Juhani Pallasmaa has since some time been an appreciated author also in Italy, principally thanks to illuminated publishing initiatives. The first important move has been the publication in Italian of The Eyes of the Skin: Architecture and the Senses with an introduction by Steven Holl, first published in 2005. Translations of another two works have followed: Questions of perception. Phenomenology of architecture, published by Pendragon (2011), and Fragments. Collage and Discontinuity in Architectural Imagery by Giavedoni Editore of Pordenone (2012). Another two volumes have very recently been published in 2014 by Safarà Editore of Pordenone: The embodied image. Imagination and imagery in architecture and The thinking hand. Existential and embodied wisdom in architecture.
Fascinated by the work and figure of Pallasmaa, his publisher Safarà has also published another work in 2014 with an acute introduction by him: “Nesting. Body, dwelling, mind” an essay by Sarah Robinson, dedicated to the same theme. The publications suggest a research aimed at fathoming relations between mental and poetical worlds, where a new light is cast also on neurosciences; while the first book has served to introduce the author in Italy, the latter two represent a systematic definition of his position in his mature phase.
The essay The Eyes of the Skin is essentially an Aesthetica in nuce; the text is organized in two parts, introduced by an illuminating comment by Steven Holl, which proves essential as a guide to the intriguing propositions and overall questions. Holl underscores, with affection and acumen, the strong bond in Pallasmaa’s work both between phenomenology and architecture, and between his Weltanschauung and the environment.
Pallasmaa’s writings, the note and the two essays configure a scenario of a holistic architecture which is inside and outside the object and which “guides our conscience back to the world and towards a sense of self and of being”, as Goethe already suggest in aesthetics and as hermeneutics and phenomenology (Merleau-Ponty and others) propose today.
The profound and reflected essay The embodied Image where, it is significant to note, the most quoted author is Gaston Bachelard – the founder of historical epistemology based on ciphers of mental concreteness and an explorer of the operations of the profound structures of the imagery, which allow for more solid exchanges and knowledge than technical-scientific ones – explores modern architecture’s possibilities to interpret and satisfy the most authentic human needs. The fundamental condition for achieving this goal is to get out from the quicksand and from the virtuosity of contemporary architecture, to re-establish the bond between architecture and its decisive impact on existential emotionality, freeing the creativity in the “dialectic between what is eternal and what belongs to time”.
Perhaps the most encompassing, persuasive and organic of Pallasmaa’s books is precisely The Thinking Hand. It contains and builds on a rich, open and engaged experience, accumulated and filtered by the author through close and continued contacts not only with the most advanced theories but also with the life and work of painters, sculptors, craftsmen, designers and other operators who express themselves through manual work. The result is a great fresco on the wisdom of the hand and of the body. It is in this workshop that we can listen to the sound and rhythm of the lived and liveable reality. It is here that contemporary art and architecture, to get out of the impasse in which it has been placed by the mimesis of contradictions and the pathologies of the world, may build new foundations and meanings to the world of research, with the contributions of ‘new manners of perception’ and a widening of the limits of experience.