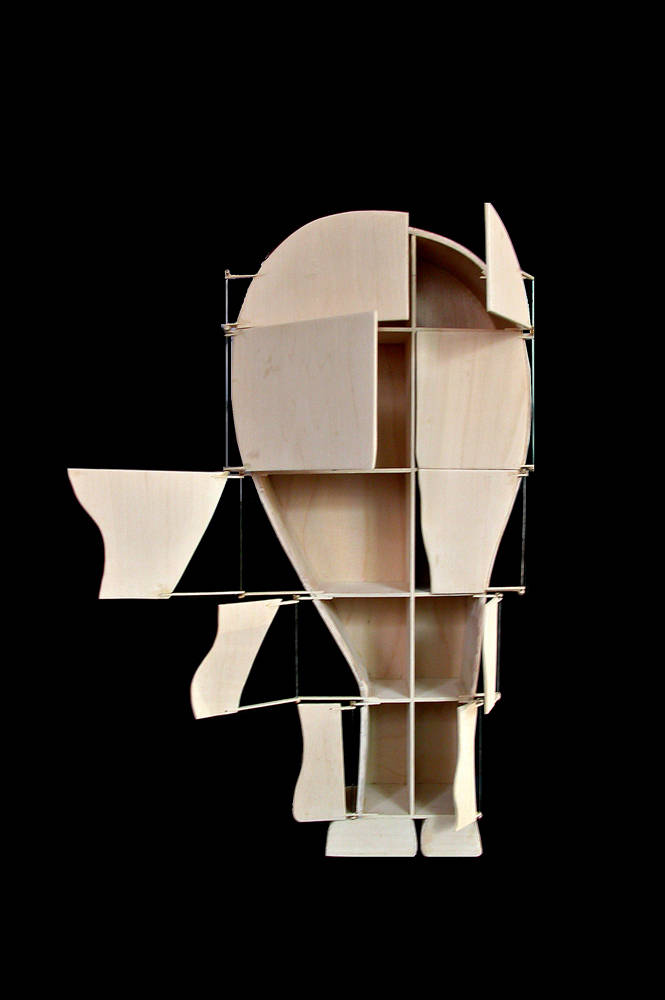 The three cabinets, “Mantegna,” “Horse“,and “Arquà“ are the fruit of ideas that came to me when I was travelling in Italy in October 2006. At that time I visited the Mantegna exhibitions
in Verona, Mantua, and Padua and while staying in the area I went to look again at Altichieri’s “Crucifix” in the St. George oratory in Padua, and at the lovely village of Arquà in the Euganean Hills, where Petrarch spent the last years of his life. During that trip, as always, I thought about how design should not restrict itself to the practical expression of form or decoration, which is what we see in most of what is produced today. Thus it should communicate the personal views of the artist as well as political, religious and existential positions and, as in this case, content connected to the story of art in the past. This is the reason behind the creation of the three pieces. The first celebrates Mantegna’s name, using the letters it contains to create a set of shelves. The second, “Horse“, recalls the times when Leonardo, Altichieri and other artists were experimenting with perspective, no longer using geometric components but elements from the natural world. The third piece evokes the mediaeval tower rising above the village centre in Arquà and revives it as a container. I had already revisited the art of the past a few years ago with two works, “Monalisa“ and “Crocefissione“, now in private European collections. So why “cabinets”?  I think the cabinet is a timeless piece of furniture, repetitive and not prescriptive in terms of content, techniques and materials. The works on display are timber prototypes, but the final versions will be in translucent, semi-elastic polychrome resin. Finally, the drawings and models used in designing the pieces you are seeing will be displayed on the walls at the exhibition, as will another cabinet called “Puglia“: a souvenir postcard of that region which I love and have visited often. The figurative components making up this work are the “P“ for Puglia and the olive tree typical of its landscapes.

The title of this work already indicates that this piece refers to the first part of Palladio‘s life. He was the son of a carpenter and a washwoman, and their house, which still exists, stands along a canal, nearby Via XX Settembre in Padua. The running water in front of their house gave his mother the opportunity to wash other people‘s clothes. I imagine that such garments would have been multi-hued and reflective of the energy inherent in color. They were a daily presence in the life of the future architect, but curiously, he never explored the resources of colored materials. In the early years in Padua, when he worked as a stone cutter, he did not perceive the chromatic possibilities of stone, marble and bricks as expressed in nearby Venice, St. Mark‘s, the work of the Bon brothers, or the facades of the palaces, which could have expanded the innovation of his already great achievements. After Padua came the Vicenza and Venetian period, during which he dedicated his work to revisiting ancient Greek and Roman architecture. His projects were made up of geometric lines, I would say almost in the Tuscan manner. If color had been present, the organicity and energy of his work would have been incomparable. This bookshelf-portrait pays homage to him on the upcoming 500th anniversary of his birth and to the absence of color in his work. On the back, there is a tribute to his mother and a recollection of water’s color, foam and soap bubbles.