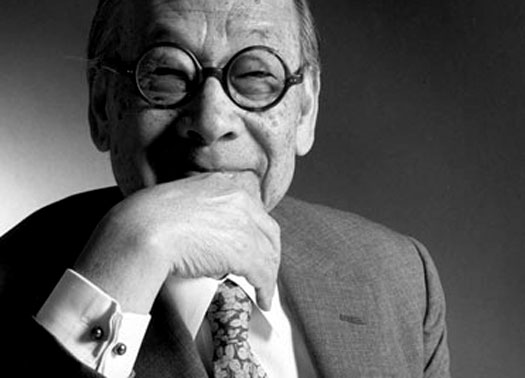 Goodbye to the Pritzker prizewinner Ieoh Ming Pei, one of the last masters of modernist architecture, and creator of the iconic glass Louvre pyramid in Paris. He died at the age of 102.

Pei was born in Canton China in 1917 and moved to the United States in 1935 to study first at the University of Pennsylvania, then at the Massachusetts Institute of Technology (B. Arch. 1940), and Harvard Graduate School of Design (M. Arch. 1946). In 1948, he took on the new role of the Director of Architecture at Webb & Knapp, Inc., the property development studio, through which he carried out important architecture and urban development planning projects in Chicago, Philadelphia, Washington, and Pittsburgh among other cities. In 1955 he formed the partnership I.M.Pei & Associates, which became I.M.Pei & Partners in 1966. In 1968 the partnership received a prize as an architecture studio from the American Institute of Architects. In 1989, the studio was renamed Pei Cobb Freed and Partners.

Pei designed more than fifty projects in the states and abroad, many of which have won awards. Some of his most important commissions include the East Building of the National Art Gallery (1978) in Washington D.C., and the iconic Louvre pyramid in Paris, France. The need to modernise and expand the Louvre, in respect of its history and architecture, led to the creation of the glass pyramid situated in the centre. It is now the principle entrance and allows direct access to the galleries in each of the museum’s three wings. The pyramid also serves as skylight for the large section situated under the courtyard that provides all public services and technical support to the museum.

Other exceptional example of his work include: the Bank of China in Hong Kong (1989), the John Fitzgerald Kennedy Library (1979) near Boston, The Morton H. Meyerson Symphony Center (1989) in Dallas, Texas, the development of the Society Hill in Philadelphia, Pennsylvania, completed in 1964, the Overseas Chinese Banking Corporation Centre (1876), the west wing and reconstruction of the Museum of Fine Arts in Boston (1981 and 1986), the Fragrant Hill Hotel (1982) near Peking, China, the headquarters of the Creative Arts Agency (1989) in Beverly Hills, California, an IBN Office Complex (1989) in Somers, NY and in Purchase, NY, the Everson Museum of Art (1968), Syracuse, New York, and the Texas Commerce Tower (1982) in Houston.