Home Architecture Galaxia: the Temple by Mamou-Mani for the 2018 Burning Man Festival 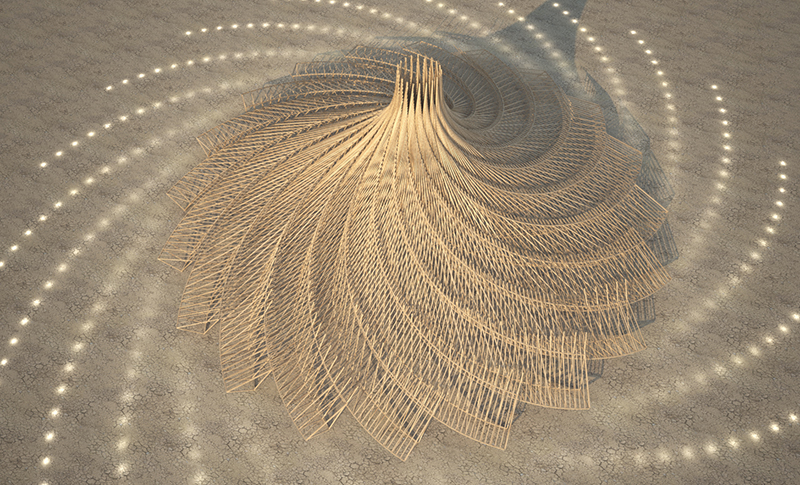 Galaxia celebrates hope in the unknown, stars, planets, black holes, the movement uniting us in swirling galaxies of dreams.
A superior form of Gaia in Isaac Asimov's Foundation series, Galaxia is the ultimate network, the fabric of the universe connecting living beings into one entity.
Galaxia is shaped of 20 timber trusses converging as a spiral towards one point in the sky. The triangular trusses form different paths towards a central space holding a giant 3D printed mandala, the heart of Galaxia.
The timber modules start large enough to hold small alcoves in which people can write in peace. As participants walk through the path, the timber modules lift up and become thinner and thinner towards the sky as people reach the central mandala.
The London-based French architect Arthur Mamou-Mani is the designer of this amazing structure that is going to be built during the  Burning Man festival from the 26th of August to the 3rd of September 2018.
Arthur is an advocate for a new approach to architecture in which the architect is also the maker in line with Burning Man’s ethos. His work matches 3D modeling tools like Rhinoceros and Grasshopper 3D with fabrication tools like laser cutters and 3D printers.

Building the Black Rock City Temple is a significant undertaking.
It’s also a chance to realize a dream and create a space for thousands of participants to have meaningful experiences.
Building the Temple is also a big financial commitment, and the grant covers a portion of the total expenses.
If you’re looking to make a year-end tax deductible donation, we’re pleased to share that Burning Man Project is fiscally sponsoring this year’s Temple project.
Please visit Burning Man Festival website.