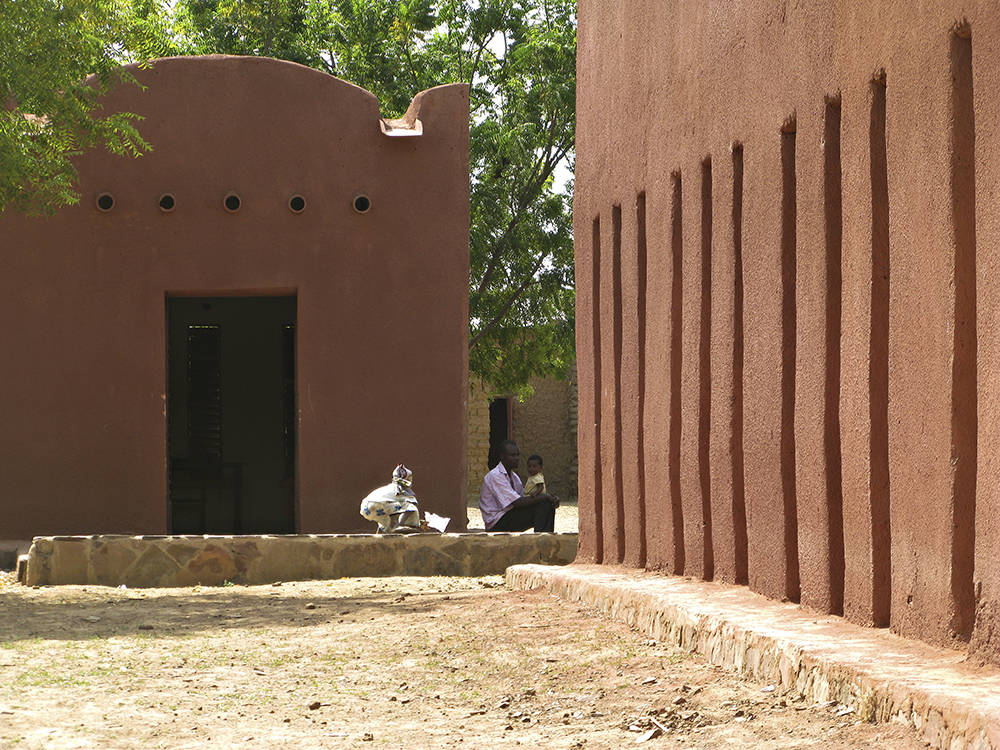 The building of a public school in the village of Fansirà Corò is part of a public infrastructure program promoted by AFRICABOUGOU, an Italian non-profit organization that furthers education initiatives in the rural community of Yelekebougou, in the north-western region of the Republic of Mali, one of the world’s poorest countries, which barely gets by on a sustenance economy based on a few farming products, and where a large part of the population has no access to minimal infrastructures (water, health care and school). Surrounded by savannah on every side, Fansirà Corò is one of 17 villages forming a rural municipality. It has about 450 inhabitants belonging to the bambarà ethnicity, which mainly dedicates itself to farming the land. Within this context the building project is an opportunity to experiment all phases of a process of participative collaboration with the inhabitants and future users of the structure. The schedules, materials and construction methods have been agreed on during meetings and gatherings, and the works have been planned so as to assure compatibility with the materials found in the area and, most importantly, with the availability of workers, that is to say during seasons when there is less work to be done in the fields. The new school, which had become necessary because of the unsuitability of an existing building erected about ten years ago, is to be found inside a small forest of neem trees planted in the mid-Nineties. The plan is simple. The three bodies housing the classrooms are arranged around a central space, in such a way as to make the most of its green surroundings and to create new open spaces that may be used by the classes, with small benches and stone pavements where the pupils may gather. The whole system is connected to the existing school building – which will be converted into dwellings for teachers and storage areas – respecting the limits that close the projection of the three new volumes. The circular central pavement suggests the hierarchies and alignments of the project as a whole. In this area it is possible to catch glimpses of the three classrooms through terracotta windows.

Slightly shifted, according to a rule of asymmetric references, the system confirms and invalidates itself in one of the three volumes, which vaunts a more elaborate structure in the part nearest the village, in the form of a module housing the school management.
Following local traditions, the main building material is earth. The planners have taken care to limit the use of imported technologies that are foreign to the natural inclination to self-construction typical of people in rural districts, and that above all lead to economic and commercial dependency. This has led to the study and application of the Nubian vault, an alternative technique based on the use of roofs in crude earth built without the use of sheet metal, wood or formwork, and which makes it possible to build interiors with a very good thermal performance. The building of classrooms, which must be of standard dimensions established by the Ministry of Education, has made it necessary to update and adapt this typology by developing an experimental hybrid system where the vaults with inclined courses are combined with concrete beams shaped as inverted T, in order to create open spans of considerable dimensions.
Two beams and three vaults form the classroom module which, after only ten days of work necessary to prepare the casting of the beams, has made it possible to erect a building built entirely from earth, with instruments and manpower found in the village.
Expert workers from adjacent villages, in which buildings have already been realized with this technique, have assisted the construction works of the local community, which has guaranteed the production of 30,000 unfired earth bricks for the load-bearing walls and 15,000 smaller bricks for the construction of the roof vaults. The women have made sure there was no lack of water for the production of the bricks and the earth mortar.
The whole village, including the children, has participated and assisted in the construction, guaranteeing the contribution and presence of young apprentices who have begun to learn the first basics of the building method, in their turn becoming masons in a single building site season. These young farmers turned apprentices will then work on other constructions, also outside their own region. The structure of the building, with foundations, walls and roofs, has been completed during the dry season, in three months of construction, while the finishing works (lime wash, floors and furniture) have been completed in the beginning of the following season. The building of the school has required five months of work and has cost about 26,000 euro. Once the work is completed a management committee formed of men and women from the village will guarantee the maintenance and management of the building. The result of this continuous exchange between planning and process is pencil notes on a cigarette pack of the outline of the new halls, new self-construction projects for homes with Nubian vaults, and a growing number of persons interested in learning the technique. All this suggests that the project will per force go beyond the opening of the school, the moment the pupils enter the classrooms, and that it will continue and turn into even greater results, extending beyond the building and furthering integration in the community with projects aimed at awareness creation, as for instance the first architecture workshop for children that was held precisely in the school in Fansirà Corò at the beginning of the new school year.
It is a matter of an architecture project that looks for answers to evident needs: its chief resources are the earth and hands, backed by the participation of the local inhabitants. This guarantees that the construction will be perceived and experienced as an asset belonging to the community, which will thus care for it and contribute to it with the greatest possible autonomy and responsibility. In such an environment every decision associated with the design, construction, strategy or composition depends on a direct confrontation with the evident needs of the places, the people, the climate and the technical and practical possibilities, in order to find a logical link between method (in architecture) and social commitment. An experience of design, work, and personal reflection on the role of architecture, on how one can and why one should intervene also in places like these.

The workshop was realized as the last step in the project aimed at building a school for Fansirà Corò, on the basis of the premise that children play a crucial role in the process of appropriation of an architectural construction on the part of the community.
The design approach is extended to include unmissable opportunities associated with the realization of the building. The primary intention has been to give even the smallest members of the community the means of reading the change which is taking place. Architecture may, for all effects and purposes, represent an appropriate means towards this end because its manifestation in the real world helps the children to identify the different phases of the process – yesterday the old school, today the new building, tomorrow the shared project – and at the same time it succeeds, thanks to its quality, in inspiring them, transmitting a curiosity and desire to find out more about the environments they spend their time in, teaching them to give a value to the space they live in. The architectonic process is elevated to a pedagogic device in the hope that they may, starting with the analysis of a familiar place, apply this means of discovering the secrets of everyday life to any scenario.
The itinerary has been developed, with the aid of participatory methodologies, individual exercises and group activities which have, starting from the discovery and in-depth analysis of specific themes, led the children to realize a project in the open, using recycled tyres found by the only gas station, alongside the tarmac, a few kilometres from the village.