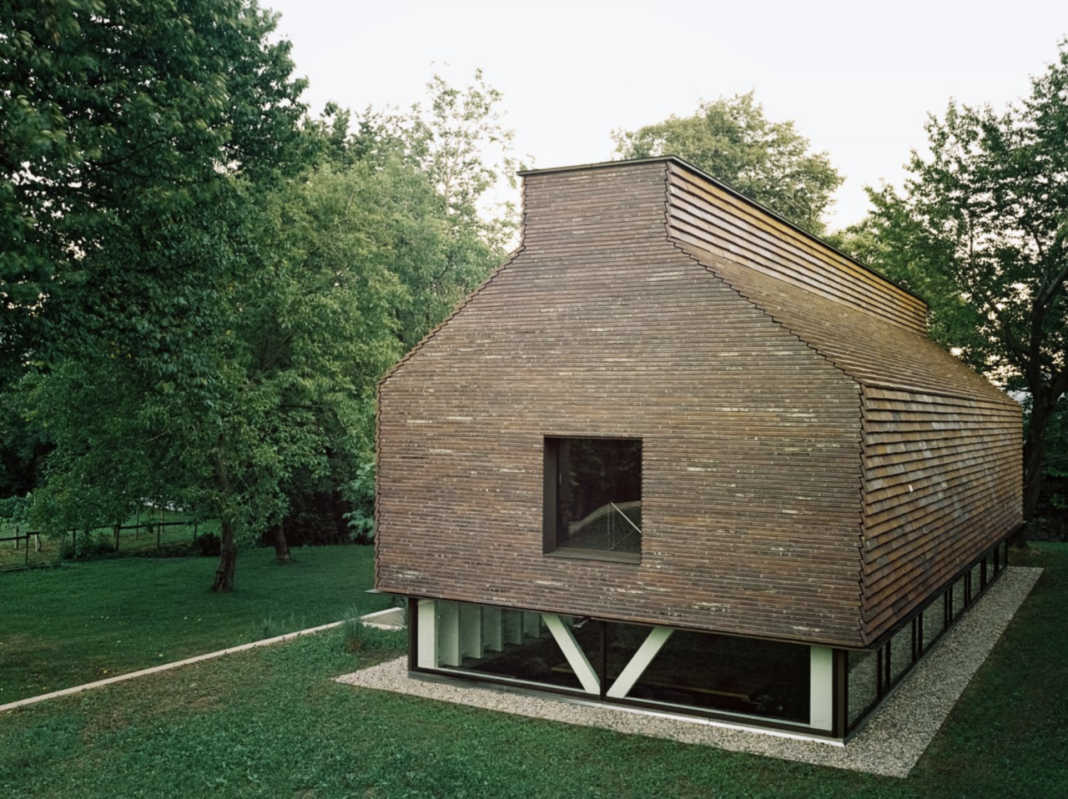 Designing, thinking and debating about architecture with the gaze turned to the level zero of the ground line. And the changes of the trend of that line is the reason for being of the project of StockerLee Atelier in Rancate (CH). In via Molino Nuovo, at the very end of the town, there where residential buildings alternate with gardens, vineyards and woodland areas, the site extends in direction NS, looking at Monte Generoso at Northeast. Beyond the East border of the site, the plurifamiliar home Eiger Mönch Jungfrau looks at the new construction of the Atelier from the top of its concrete basement, without ever crossing its gaze. A stair, engraved in the soil, lead from the driveway to the walkway at the same level of the new building. The walkway is constrained by a wooden meadow at East and by a small retaining wall at West. The entrance to the Atelier goes through a trench between two concreate walls which hold back the lush vegetation.

With a rectangular plant 6.60 x 17.60 meters and three floors, the shell of the Atelier, covered with long roof tiles, doesn’t allow any hole towards the building upriver, while it opens its glaze with more emphasis towards the ground at the level of the horizontal window at the ground floor and towards the sky through the longitudinal skylight. The ground and the sky are cut out by a continuous glazed ring and a linear laceration of the ceiling, other than two holes at the first floor, which look at East and North like two telescopes. The same concrete basement which according to Eiger Mönch Jungfrau defined the plinth from which the building raises, here it sinks in the ground, deriving from the same hole the working areas devoted to the Atelier’s activities. At ground zero, the basement interrupts, leaving a chance for the evolution of the continuous glazed ribbon. The theme of contact with soil seems to emerge continually in the reflection the project offers. The dig, the floor zero lowered compared to the ground level, the dark nucleus of concrete which elevates from the underground floor up until the first floor: these are all architectural elements of strong materiality and with an individual specific weight. The wooden structure, withe and repetitive, is the structural frame [or skeleton] for the elevated part of the building. The single element of the portal is repeated 29 times longitudinally, leaning at the two ends directly on the East and West sides of the rectangular perimeter of concrete. The plan on which the elevated wooden structure stands is to be intended as a fence along the whole rectangular perimeter and never interrupting, but in order to leave room to the entrance. The concrete perimeter is molded in an inward bend, making the edge a living space. It is the border between outside and inside which, thanks to the unfolding of a continuous frame along the perimeter, put into a direct connection the working surface and the grass surface outside. Here, along the gazed perimeter in direct connection with the soil, the structure and its dichotomous nature are revealed. The cover of long roof tiles slides down from the top of the building covering all the facades so to allow only a continuous glazed ribbon which reveals from an external view both the structural connection between the construction systems and, none the less, faces and movements of people working inside.

The concrete body rises as a diggable mass, dark and tough, so to include the flight of stairs, the bathrooms and an alcove which, at the first floor, together with working and meeting rooms, hosts a kitchen. This element belongs to the same nature of the soil which includes the basement level, devoted to modelling and technical rooms. The materiality of the building, the clear interpretation of its parts, the honesty of the direct exhibition of the cover, the overcoming of the need of subdivision of internal space: these are all elements of the project which reveal a limpid attitude toward thinking and designing architecture. The wooden slab of the first floor only partially covers the entire area available allowing not only to obtain a raised stage from which observe the working space below, but also it allows the light to filter from the skylight to the ground floor. The resulting double height put into sound and visual connection what happens at the ground floor with what happens upstairs. The inside space is lighted by a diffused zenith light, which is able to change its chromatic and atmospheric features as time and seasons go by. At the ground floor the gaze is turned outside trough the horizontal window at the grass and all the essences seeded there. The furnishing elements, designed each ad hoc, once again underline a strong material duality between the warm wooden surfaces used tables and working tops and the cold steel panels cut into modular elements joined together in order to sustain the shelves anchored to the concrete structures. Steel frames are combined with concrete like a lichen on a rock whereas wooden elements are used where the work requires large, warm and comfortable surfaces. StockerLee Atelier in Rancate is a protected place where to work in a collegial way and with freedom of movement. A circular movement, like a dance around the strong concrete nucleus which swallow and hide the vertical connections and utility rooms. A machinery built to indulge meditation, movement and interaction among designers, a fence which protect, in which one seat with legs below the ground line, turning the gaze to the sky or to the close horizon which is nothing but the extension of the working table. (text by Alessandro Mosetti)