A new project, but that looks at the past and at the tradition of our country to meet the need, increasingly current in contemporary life, to slow down the frenetic daily pace and to rediscover matter. A competition having the aim and the ambition of giving shape to a harmonious and simple environment, in which each detail should have its own function and should be able to express the strength of the project and of the material used: the "bathroom of the biodynamic winegrower" was the focus suggested by EERA, stone solutions for architecture, to investigate the subject of a project for a bathroom environment in which, in addition to aesthetic values, the correct use of the chosen materials would be proposed and elements referring to a country life, reinterpreted in a contemporary key, would be included.

The winning project, that is to say the one by the firm CLAB, formed by the young architects Andrea Castellani, Nicola Bedin, Matteo Fiorini and Paolo Rigodanzo, was successful in its intention to given life to a harmonious space within a given volume, creating a well cared-for environment designed in every detail, and working on the truest essence of the materials such as marble, crude soil and wood. This is what the designers have to say about the path of a "Stone Aleph", from the birth of the concept to the implementation of the final project: "For some years we have been dealing with stone and for us this competition, with its rather eccentric issue, was a challenge. In order to understand it in full we met several times with a biodynamic winegrower of the Valpolicella area, and understood that we had to think in the same way he did: looking for a balance between nature and artifice. We transferred this idea to a quarry, the primary element, and once the slabs of marble had been cut horizontally it could be said that the project was done. The sense was to 'find oneself inside the matter'".

This gave rise to a project exalting the materials used thanks to a refined proportional balance and to objects that become significant elements of the composition. Like the bathtub that drew inspiration from the old-fashioned wooden tub on which the shapes and the construction principle are based even though the new tub is made entirely of marble. The faceted outside work highlights the presence of each single ashlar while the inside is smoothed to increase the comfort. The cork plug and the wooden caddy become precious and functional details that embellish the image as a whole. The washbasin, on the other hand, was thought up as a stone version of the old wooden containers in which to crush grapes. The bathroom features a large slab of Statuario Venato marble suspended in the air that in actual fact is a thin and far lighter alveolar slab. A decisive contribution to the success of the project came from the great professional skill and experience of the personnel of EERA, the firm created to spread the tradition and knowledge of working stone, ferrying this unique material into contemporary projects and into the bathrooms of the future. 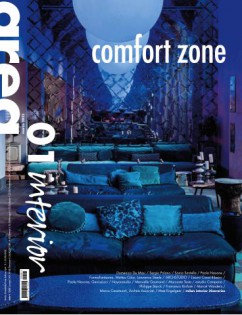