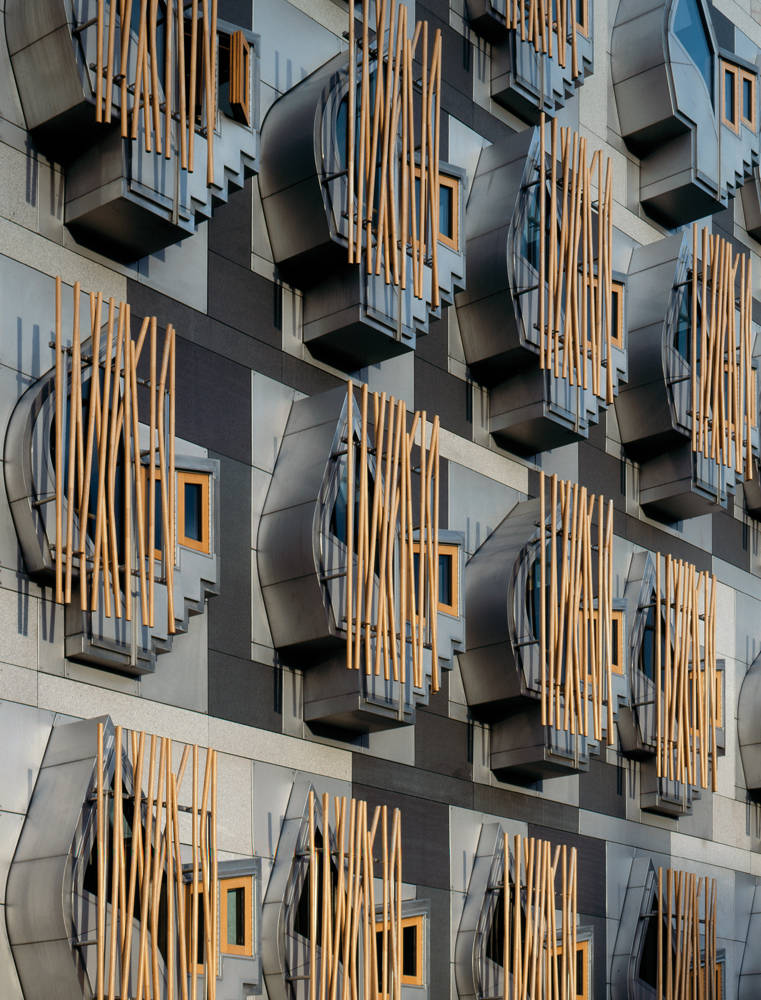 Scotland is a land... It is not a series of Cities. The Parliament should be able to reflect the land, which it represents. The Open Site...This is a crucial image in understanding the possibilities of the site. The land itself will be a material, a physical building material. We would like the qualities that the peat gives to the water and turf were the basis for the new Parliament.
This is a way of making a conceptual distance from Holyrood Palace. Whereas the Palace is a building set on the landscape, related to the gardening tradition, the Scottish Parliament would be slotted into the land. The perception of the place and the scale of the site will change drastically when the end of Canon Gate is opened. The small scale of the houses along the Canon Gate will appear again and distant views will open to the Robert Burns Monument and the rock of Arthur’s seat. The new Scottish Parliament should not impair these vistas which will become visible when the existing Brewery is demolished. Small scale and long distance views, like the attentive eye of the John Knox building on the Royal Mile, offer a new field of vision. The Parliament sits in the land because it belong to the Scottish land. This is our goal. From the outset we have worked with the intuition that individual identification with land carries collective consciousness and sentiments. We don‘t want to forget that the Scottish Parliament will be in Edinburgh, but will belong to Scotland, to the Scottish land. The Parliament should be able to reflect the land it represents. The building should arise from the sloping base of Arthur’s seat and arrive into the city almost surging out of the rock. The seats of the parliament are a fragment of a large amphitheatre where citizen can sit on the landscape. It is a diagram that could be built in many ways…The social form could have many ‘forms‘…The natural amphitheatre will be the first form in the land. We hope that what emerges from this form is a series of identifications between the building and the land, between land and citizens, between citizens and the building. Not just and ‘image‘ but a physical representation of a participatory attitude to sit together, gathering. How is it going to be fundamentally distinct from other European Parliaments? Instead of an overwhelming monument, which only relates to dimensions and rhetorical forms, we like to think about it in terms of a psychological approach. What is the mental image of the new Parliament?
How will all of us, citizens, relate in our mind to the new Parliament? The Parliament should belong to a broader concept. The specific place should not be crucial. The Parliament building should come out of a clear and strong statement…in a way independent of site circumstances… Any strong statement should carry political implications…The Parliament is a form in people’s mind. It is a mental place. That place should be expressed in the site. We have the feeling that the building should be land…built out of land…To carve in the land the form of gathering people together. Neither a building in a park nor a garden. Citizens, sitting, resting, thinking but in a similar place and position as members of Parliament. From our recollections of Scotland we find these images that stick in our minds. The boats offered by the land. We like these boats not only in their construction, but also in their dedicate presence in a place. Something about their form floating in the landscape should be a part of our project.