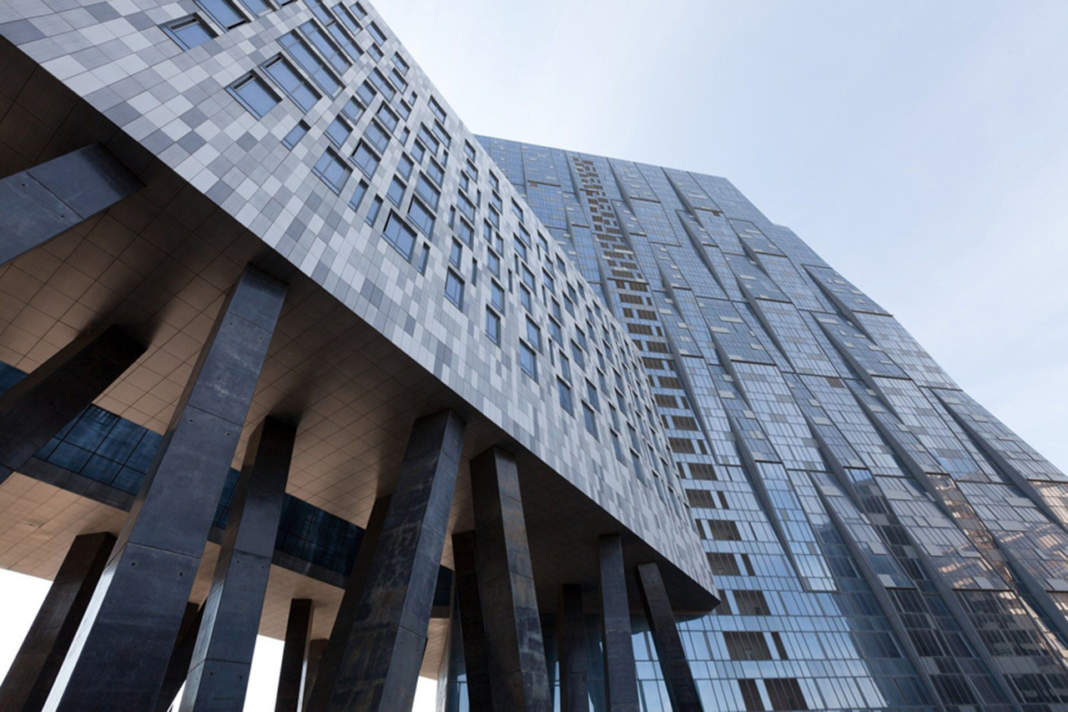 Residential multifunctional complex is situated in Moscow, nearby the open spaces of Poklonnaya mountain and the Setun river valley. Its composition was dictated by existing situation and initially consisted of two symmetrical pairs, rather different from each other in details. Construction of the first pair is nearly complete.
The urban idea of the project is creation of a new city accent which could enrich the perception of spaces, surrounding the visual points in this part of Moscow. Construction site was chosen to be on the breaking point of the longitudinal profile of the local road. Architecture of the skyscraper responds to the nearby sparse building, dense greenery of Moscow State University's spaces and the huge territory of “Mosfilm” film studios. The main tower marks the main entrance to the complex. Principle of private and public areas was taken as a foundation of the functional program of the complex. Project provides separation and independent existence of inhabitants, guests and office staff. Main elements forming the composition of the complex are the 213 meters high “A” tower and the 130 meters high plate of the high-rise “B” block.
Both multistory buildings are connected with each other by a pair of parallel eight-storeyed buildings of block “B”, forming an atrium space between them, filled with natural light in spite of giant buildings nearby. The whole aboveground part of the complex rests on the three-leveled stylobat, where the underground parking, trade and sport facilities are located. Office and living entry zones, sport-grounds, playgrounds, and recreational facilities are situated on the roof of the stylobat. Offices and trade center are separated from blocks A, B and C. The main tower (A) and the low-storeyed prisms of block B are raised 17 meters over the stylobat top, standing on 50 symmetrically positioned vertical and tilted columns made of carbon black reinforced concrete.
Lightweight “alpolic” facade panels having 8 different shades of color emphasize the height of the main tower. Composition of the panels was set to make a mosaic gradient from bottom up: from marble white on the very top, to the dark tints of Jurassic stone on the bottom. “Alpolic” panels are ventilated facade elements, specially manufactured in Japan. They are assembled from separate modules to simulate natural stone. The “A” tower has a spiral silhouette due to its rhombus-like plans. Every upper storey turns slightly counter-clockwise against the one below it. Thus obtuse angle made by adjacent facade panels at the first floor, becomes sharp at the top. On the opposite facade we see the same conversion of angles in reverse order. Both facades of “A” tower gets a full height diagonal caused by intersection of two planes, which adds extra dynamics to the structure.
The “B” block plan is also very sculptural. It has a woven basket-like composition of facade planes. Their interlacing flat surfaces turn either to the sky or to earth in turns, changing the color of reflection accordingly, to create wider variety.