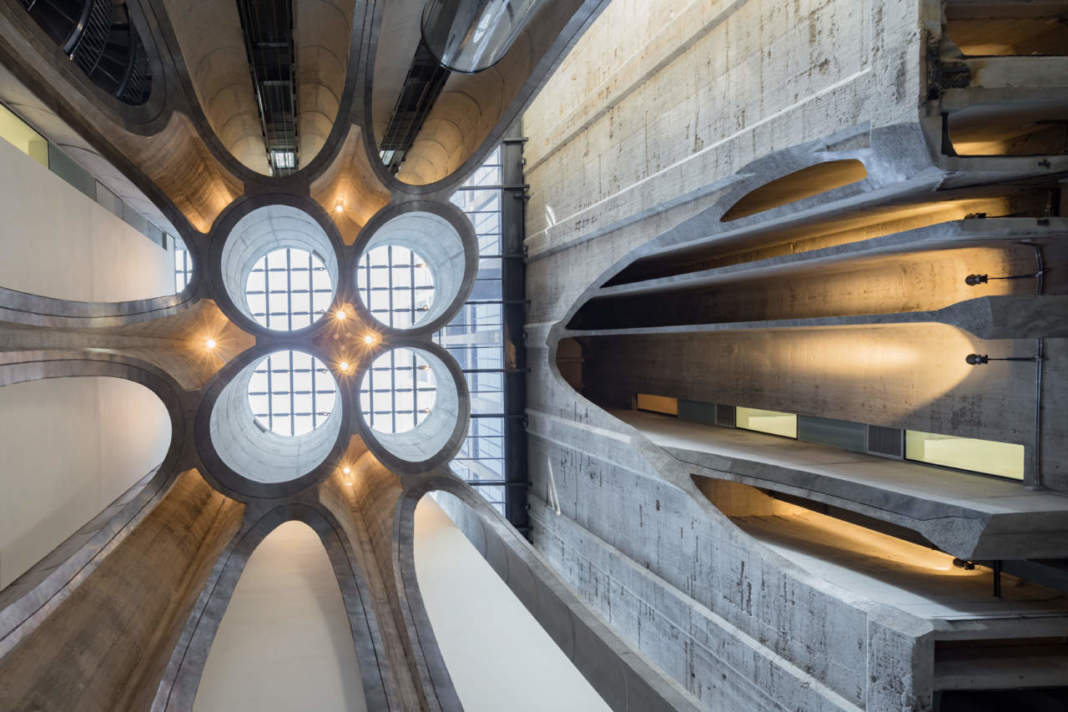 The new project by Heatherwick Studio, the Zeitz Museum of Contemporary Art Africa (Zeitz MOCAA), has been unveiled to the public on 22 September 2017 at Cape Town’s V&A Waterfront.
It represents the world’s largest museum dedicated to contemporary art from Africa and its diaspora and is designed by internationally acclaimed designers Heatherwick Studio, based in London. The museum is housed in 9,500 sq metres of custom designed space, spread over nine floors, carved out of the monumental structure of the historic Grain Silo Complex. The silo, disused since 1990, stands as a monument to the industrial past of Cape Town, at one time the tallest building in South Africa, now given new life through the transformation by Heatherwick Studio.
Since the 1920s, the prominent grain silo on Cape Town’s stored and graded corn from all over South Africa. After it was decommissioned in the 1990s its owners, the Victoria & Alfred Waterfront, approached the studio to develop ideas for adapting the silo and its site. Although the waterfront was already a vibrant area, it lacked a major cultural institution.

The galleries and the atrium space at the centre of the museum have been carved from the silos’ dense cellular structure of forty-two tubes that pack the building. The development includes 6,000 sq metres of exhibition space in 80 gallery spaces, a rooftop sculpture garden, state of the art storage and conservation areas, a bookshop, a restaurant, bar, and reading rooms. The museum will also house Centres for a Costume Institute, Photography, Curatorial Excellence, the Moving Image, Performative Practice and Art Education.
The R500 million (£30 million) development of Zeitz MOCAA, announced in November 2013, has been created in a partnership between the V&A Waterfront and Jochen Zeitz, as a not-for-profit public cultural institution in the heart of one of most visited cultural and historical hubs in Africa. Set on the edge of a natural, historic working harbour, with the iconic Table Mountain as its backdrop, and sweeping views of the ocean, city bowl and mountain peaks, V&A Waterfront attracts up to 100,000 people a day.

Realising the concept of carved tubes was technically challenging. Modelled on a single grain of corn, the rounded shape was scaled up to fill the 27-metre-high volume and then translated into thousands of coordinates, each defining a point within the silo’s tubes. Mapped out physically with nails, the brittle concrete tubes only 170mm thick were then lined with partial inner sleeves of reinforced concrete.
The new concrete sleeves created a stable composite structure 420mm thick and provided a cutting guide for removing portions of the old silos. The existing tubes were pared back to reveal the curved geometries of the 4,600 cubic metre atrium. The cut edges were polished to give a mirrored finish that contrasts with the building’s rough concrete aggregate. Each of the carved tubes was capped with a 6 metre diameter panel of laminated glass that brings daylight into the atrium.
The proportions of the tower portion of the silo complex made it unsuitable for exhibition space. The design team reconceived this structure as an illuminated beacon. Inspired by the bulging glazed texture of a Venetian lamp, we developed a method for the new glazing that would give a similar convex effect.

Thomas Heatherwick, Founder of Heatherwick Studio, said: “The idea of turning a giant disused concrete grain silo made from 116 vertical tubes into a new kind of public space was weird and compelling from the beginning. We were excited by the opportunity to unlock this formerly dead structure and transform it into somewhere for people to see and enjoy the most incredible artworks from the continent of Africa. The technical challenge was to find a way to carve out spaces and galleries from the ten-storey high tubular honeycomb without completely destroying the authenticity of the original building. The result was a design and construction process that was as much about inventing new forms of surveying, structural support and sculpting, as it was about normal construction techniques. As the opening approaches we are all looking forward to witnessing the impact of the museum’s ambitious artistic programme and the museum taking its pivotal place in the middle of Africa’s cultural infrastructure.”

Mat Cash, Group Leader, Heatherwick Studio said: “Our challenge was understanding what was needed for an institution of such broad ambition then extracting that space, flexibility and scale from an almost solid historic object. Because the radical transformation of the space and function of the building risked losing the stories it had to tell, we needed to be brave and respectful at the same time. It has been an enormous privilege to work on a project of such significance. We owe a great deal to our expert local collaborators with whom we’ve worked so closely over the last four years.”