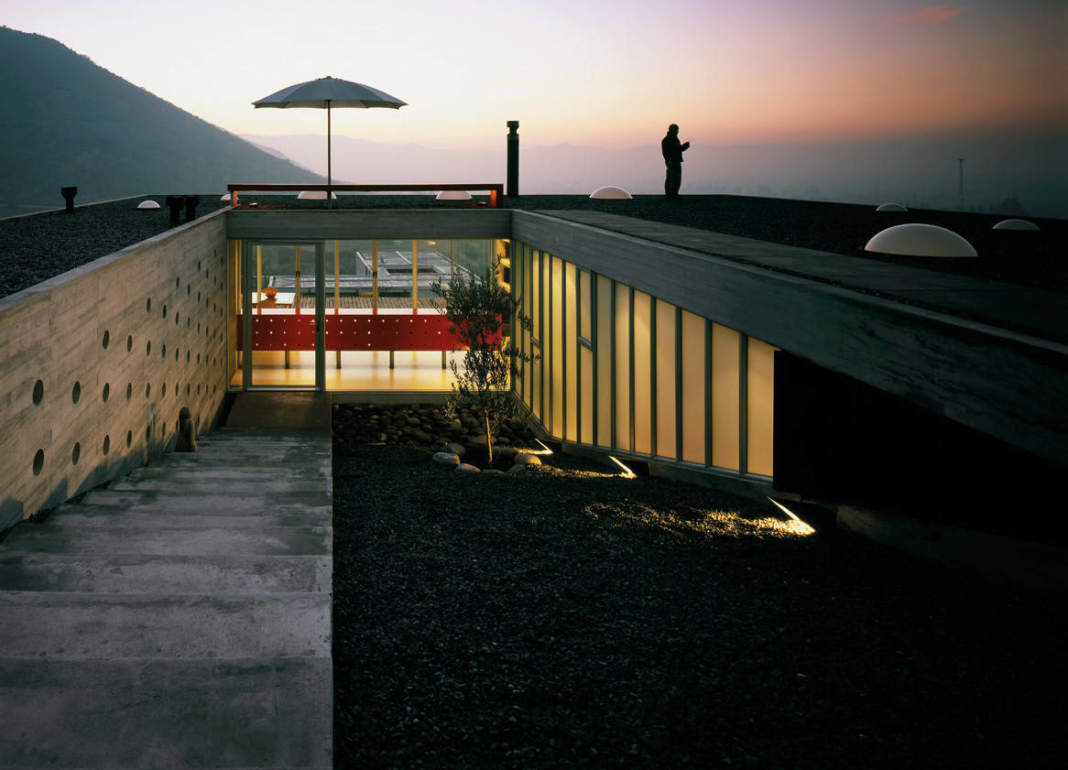 The commission was received from a real estate firm which wanted the design of a repeatable house, possible of being sited on a slope with 25% average gradient. The offer should be kept within an acceptable range for a standard user, a newly born family requiring an area not higher than 140 square meters. On the other hand, the stress should be set on the impact these houses should have among the projects package such offer raise. It was explicitly requested to build a house for sale, therefore, massively attractive, which “façade” the target public could quickly be absorbed with. Notwithstanding, the project location raises as a natural belvedere toward the valley of Chicureo, a zone peripheral to the city of Santiago of growing real estate development and considerably mediocre quality, where the condominium of serialization houses finally owns large green areas. It deals with new neighbourhoods with architectonic imports of every type, where “style” seems to be the worthiest slogan of the offer. On the contrary, our proposal was a counterproposal to the façade option, an absolute untying of the “pretty house” real estate concept, which image could adorn a web page accounting for a life style. Our proposal was a house without façade, a building to be developed from the street level downwards, rescuing that initial condition of natural “belvedere” over the valley the site proposed. The Guthrie house, therefore, is not just the answer to a housing issue over a medium gradient site, but a critical reflection to the real estate system which final target is to sell “attractive” and at a “good price” houses, built by “goodwill architects”. In other words, sell fashion.

Assadi & Pulido was informally established in 1999, and dully established in 2006 with Felipe Assadi and Francisca Pulido as its principal partners. The office has developed projects mainly in Chile, with some participation in Puerto Rico, Venezuela, Peru, USA and Italy. Additionally other three architects and two students in the practical instruction stage are part of the studio. Felipe Assadi receives the architect degree from the Finis Terrae University, in 1996, and the Master of Architecture degree from the Pontificia Universidad Católica de Chile in 2006. Currently, he is a studio teacher at the Andrés Bello University, in Santiago and has been a visiting professor at the Diego Portales and Talca Universities, Instituto Tecnológico Superior de Monterrey in Mexico, Universidad Autónoma de San Luis Potosí, SLP, Mexico, Universidad Pontificia Bolivariana, in Medellín, Colombia. His works have been broadly published around the world in specialized magazines and books. He has participated at exhibitions in Barcelona, Pamplona, London, Quito, Tokyo and Santiago. Currently, he is preparing a case study in the University of Navarra, Pamplona, Spain. Francisca Pulido receives the architect degree from the Finis Terrae University in 1996. Currently, she is professor at the Andrés Bello University for the Diploma Studio class, after a three-year period as teacher at the same university where she studied. Felipe Assadi actually is director of the University Andrés Bello Architecture School.