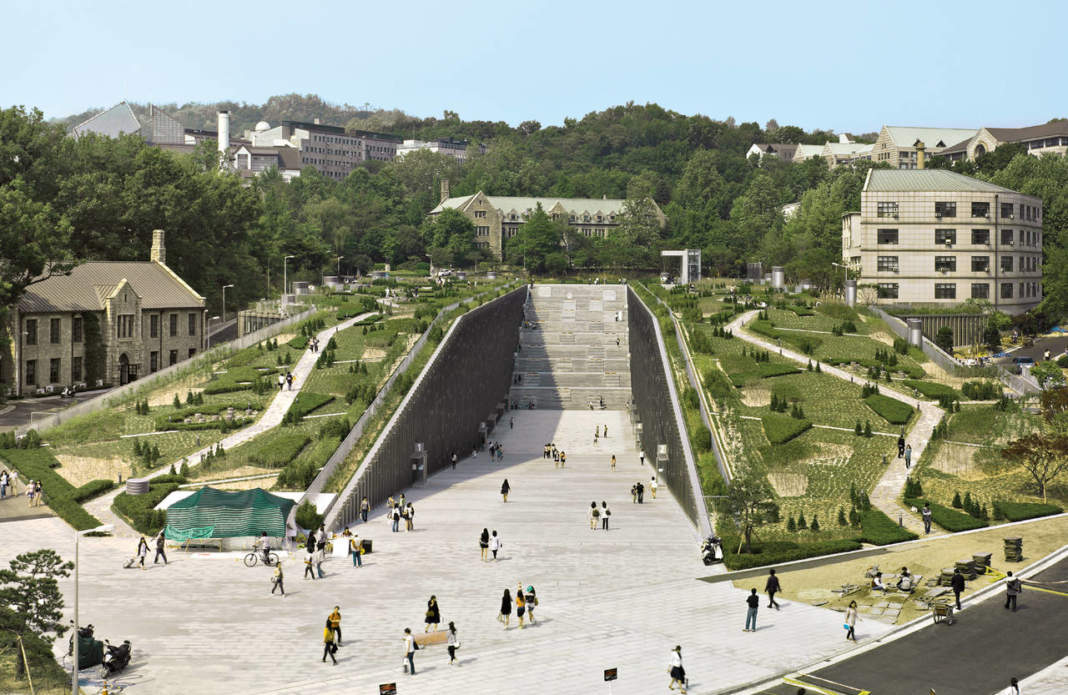 The new campus centre of the University of Ewha will be completed in May 2008 and will accommodate 20000 students. It includes spaces for study and sport, offices, a cinema and car parks. The idea of this underground university was born out of the desire to preserve a large green space in the centre of the university campus. The six-storey building is organized around a long ramp sloping down in opposition with the gently rising natural topography. The two large glass curtain walls facing the external circulation ramp serve as elements for day lighting and allow for natural ventilation of parts of the building as well.

The specificity of this building is the link between the architectural concepts and the sustainable strategies adopted. In fact, the first architectural ideas (underground building, green garden, landscape fracture) that give its strong identity to the building enable extraordinary performances in terms of sustainability. The sustainable strategies include: green roof. Besides the aesthetic and psychological benefits, numerous ecological benefits include the recovery of green space in this area of Seoul, moderation of the urban heat island effect, improved storm-water management, water and air purification and a reduction in energy consumption.
Specific benefits include: Enhanced Ecology - The roof offers dramatic biodiversity benefits including the provision of valuable habitats for nationally important species. The roof will absorb particulate pollution and airborne pollutants and contributes to noise reduction.

Mitigation of storm water. The rapid run-off from roof surfaces can often result in flooding or extensive increase in drainage capacity. A major benefit of green roofs is their ability to absorb storm-water and release it slowly over a period of several hours. Improved roof temperature.
The protection of fluctuations in temperature helps reduce internal energy consumption. As a consequence, the classrooms under the green roof are more stable providing greater comfort to users. Natural resources and renewable energy. The presence of structural retaining walls around the building led to the idea to use them as a media to harvest geothermal energy. This idea participates to a “natural resources using strategy” completed by the use of groundwater energy. The step by step system used to heat and cool the building combines: thermal labyrinth through the retaining walls (pre-heating and pre-cooling of fresh air), ground water energy (pre-cooling of fresh air during summer), heat recovery system,combined heat and power plant. At the end, 80% (winter) and 70% (summer) of the energy demands are provided only by natural resources. Water efficiency. The benefits of the proposed green roof have been described. In addition to this, measures to reduce potable water consumption have been used including: low water using fittings, rainwater collection: rainwater is collected from the roof, stored, and then used as the needs arise.

In 1981 Dominique Perrault established his office in Paris and started his first work: factory Someloir in Chateaudun, France. His first notable project has been the ESIEE (academy for engineers of electronics and electrical engineering) in Marne-la Vallée in 1984. In 1989 we won the international competition for the French National Library in Paris. The building received the “Equerre d’argent” in 1990 and the “Constructa Preis” in 1992 and it had been inaugurated in 1995 by François Mitterand. Most recognized projects include also Velodrom and Olympic Swimming Pool in Berlin (1992-1999), the town hall of Innsbruck, Austria (completed in 2002), the extension of the Court of Justice of the European Communities in Luxembourg (completion 2009), the New Olympic Tennis and Multisports Centre in Madrid (in progress) and the winner project of the competition for the Ewha Women University Campus Centre in Seoul, Korea (2004). Dominique Perrault has won numerous awards like ”New Alpine Architecture” Award 2006, Dedalo–Minosse International Prize in 2006, the ”World Architecture Award” in 2002, Mies van der Rohe Award for the French National Library in 1997 and the ‘Programme for New Architecture‘ (PAN XII) in 1983.